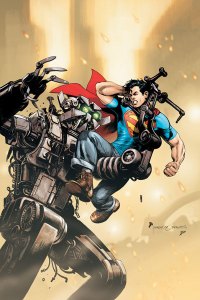 The fourth month of the new DC Universe begins with Action Comics 4, a series about a younger, brash Superman. Starting with this one, every issue will also contain a backup story making the $4 price tag a little easier. Is it any good though?

Yes, in fact I’d say this was very good. While the other issues were just fun, this one carries actual tension as alien-powered robots give Superman a legitimate challenge. He even needs help from Steel, another classic hero who makes his New DCU debut here. It also shows the military general asking Superman for help, suggesting that authorities might start to trust him after this storyline. Why so soon after they captured him and he violently broke out (issue 1 and 2?) Saying why would be a spoiler, but it’s intense. Unfortunately, this story won’t continue until Action Comics 7 as 5 and 6 will be a “Rocket Song” interlude.

As usual for this series, the artwork is great, showing lots of details and colours. The art in the Steel backup story is even better, with faces that almost look real and metal that reflects light like actual metal. The backup story is really just a fight scene that was glossed over in the main issue; it’s brutal, and it shows Steel’s technology as well as his battle tactics. Before my only knowledge of Steel came from the movie starring Shaq, but now I actually want to know more about him. Not much back-story is given here, but it was enjoyable enough anyway.

This was a great issue, and it’s easy to recommend to fans of Superman even if you don’t necessarily like his portrayal in the previous issues. It has lots of robot/alien bashing action, great artwork and great dialogue. Too bad not everything I read this week was this good. 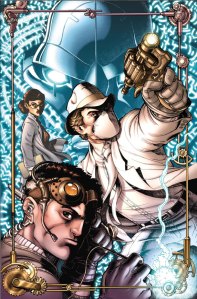 Wait, who is X-Club? They are the science team behind Cyclops’s X-Men, comprised of Dr. Nemesis, Madison Jeffries, Kavita Rao and Danger. This issue has the four of them alongside Cyclops and Magneto at some sort of space elevator launch event. While Magneto is using his powers to lift the platform into space, somehow Danger is corrupted and crazy stuff happens. I’m not sure how else to describe these events.

This issue just wasn’t that great. It started with Dr. Nemesis’s speech to the public, which was overly scientific and complicated – just to be a jerk. Considering the X-Men want to improve their public image, that simply doesn’t make sense. As for Danger getting corrupted, it’s predictable and cliché. The artwork is fine, but nothing special. While this miniseries has potential, it’s just not showing here. I’ve read other X-Club one-shots by Simon Spurrier, who wrote this issue, and liked them better. Maybe this mini will improve as it goes on, but I can’t recommend this issue.

Dr. Nemesis is a mutant with an expanded lifespan, an enhanced immune system and heightened eyesight. He was involved with Nazi medical experiments but has since turned his life around. Jeffries is another mutant with minor telekinesis with metal, plastic and glass. He has a history with Alpha Flight, a Canadian mutant team, and I know little else about his history. Rao is a scientist who was behind the mutant cure, which would permanently suppress mutant powers and make them human. For more information on that, check out Astonishing X-Men by Joss Whedon, which might actually be the greatest X-Men run ever.

Other comics I read this week include iZombie 20, Detective Comics 4, Amazing Spider-Man 675 and X-Factor 228.

iZombie 20 was good. I first read this as a new comic of the week and really enjoyed it. If I like the next issue too, I’ll probably stick with this series for a while.

Detective Comics 4 was alright. It was better than the weird 3rd issue, but I’m not sure about this one. I don’t think I’ll get number 5 when “Batman” is so much better.

Amazing Spider-Man 675 was great. The classic villain, Vulture, has returned, and Spider-Man must work with his ex-girlfriend cop to solve the mystery of young adults falling to their deaths around the city.

X-Factor 228 was also great, but this series is hard to recommend to anyone who hasn’t been reading it for a while.

I am a relatively new comic book fan writing this blog for other new comic book fans and/or people who are interested in comics but don't know where to start. I've always been interested in writing, to the point where I have a college Creative Writing Certificate and I'm currently a year 2 Journalism student. I also have another blog where I mostly make fun of bad movies - www.healed1337.blogspot.com As for how I got into comics, I've always had a passing interest in superheroes: most notably Batman, Spider-man and the X-Men. Until February of 2011 (I think,) my only experience with any of these franchises came from the movies and video games. Shortly after I bought Marvel Vs. Capcom 3 however, I decided to check out X-23, Wolverine's female clone. I ended up reading her Innocence Lost origin story and enjoyed it. From there, I started reading various X-Men comics and it quickly exploded into my newest hobby. My other interests/hobbies include video games, movies, music, playing sports, my dogs and weird news.
View all posts by healed1337 →
This entry was posted in comic review and tagged action comics, comic review, superman, x-men. Bookmark the permalink.