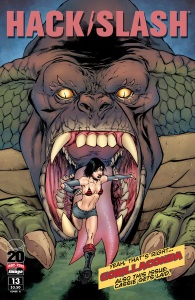 This is my new comic of the week. Every week I review a comic from a series I’ve never read from before, without researching it beforehand. I critique it on both its quality and how easy it is for a new reader to understand it. Why this one? There was monster described as a Gorillaconda on the cover – that’s awesome.

This comic is definitely not for kids. There’s uncensored language, partial nudity in a sex scene, and some bloody violence. The series stars Cassie Hack; she hunts serial killers. While the recap page doesn’t say much about the current storyline, it says enough for new readers to figure out what is going on as they read the issue. It doesn’t take its readers for idiots which is good since again, it’s not meant for kids.

This was actually kind of awesome. Cassie Hack and her friend, Catherine, are staying over at a fictional movie studio with living dinosaurs and a science team inside. They seem friendly at first, and have even discovered a way to remove concentrated evil from serial killers, or something like that. As expected, nothing is as it seems. For half of this issue, Catherine is being chased by raptors while Cassie is getting laid. Yes, the Gorillaconda appears at the end of the issue, but unfortunately for one panel only.

I’m surprised how much depth was in a comic with the title “Hack and Slash.” Sure, it’s not ultra-deep like The Dark Phoenix Saga, but it’s much deeper than the title suggests. It’s a little campy at times, but in a good way. There’s plenty of character development and some interesting concepts that I actually want to find out more about. This is all backed up with strong artwork with detailed shadows. If any of this sounds appealing to you, this is worth checking out. 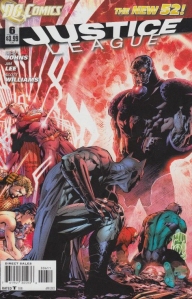 The new Justice League series finishes its first story arc here with the group of heroes facing off against Darkseid. Who is Darkseid? Apart from being a very powerful villain that’s not from Earth, this story arc doesn’t specify. Then again, it’s not important to the issue.

The first half of this comic is one big fight. It takes the combined efforts of the Flash, Wonder Woman, Cyborg, Green Lantern and Aquaman to hold him back while Batman rescues Superman (he was captured in issue 5.) It’s clear that Darkseid is a force to be reckoned with, but being a rebooted universe, I was hoping for more details on exactly what his power set is. The second half of the issue is the public adoring this new group of heroes, even though they’re not ready to call themselves a group yet.

This issue also includes a five page backup story about Pandora, a mysterious figure who’s been popping up in the background since the new DC Universe started. This mysterious little side-story is almost the highlight of the issue. It will leave you wanting more but for a five-page side-story, that’s a good thing.

This issue wasn’t quite as good as it could have been, but it was still great fun. There is no room for character development here, only fighting and introducing the team. The artwork is good, the dialogue in the second half was both interesting and amusing, but it still feels like it’s missing something. I still recommend it, but hopefully the next story arc will improve on this one.

I am a relatively new comic book fan writing this blog for other new comic book fans and/or people who are interested in comics but don't know where to start. I've always been interested in writing, to the point where I have a college Creative Writing Certificate and I'm currently a year 2 Journalism student. I also have another blog where I mostly make fun of bad movies - www.healed1337.blogspot.com As for how I got into comics, I've always had a passing interest in superheroes: most notably Batman, Spider-man and the X-Men. Until February of 2011 (I think,) my only experience with any of these franchises came from the movies and video games. Shortly after I bought Marvel Vs. Capcom 3 however, I decided to check out X-23, Wolverine's female clone. I ended up reading her Innocence Lost origin story and enjoyed it. From there, I started reading various X-Men comics and it quickly exploded into my newest hobby. My other interests/hobbies include video games, movies, music, playing sports, my dogs and weird news.
View all posts by healed1337 →
This entry was posted in comic review and tagged aquaman, batman, darkseid, green lantern, hack and slash, justice league, superman, wonder woman. Bookmark the permalink.