This is my new comic of the week. Every week I review a comic from a series I’ve never read from before, without researching it beforehand. It’s critiqued on both its quality and how easy it is for a new reader to understand. Why this one? Because a guy in the Mass Effect 3 midnight lineup recommended it.

This was surprisingly easy to understand, having no foreknowledge of Superboy. It seems he was either created or modified in a lab to have at least some of Superman’s powers, as well as a touch-based telekinesis. This telekinesis can both effect his environment and lets him read it by touch. While the heavy exposition makes it easy for new readers to understand, it could become annoying if the series relies too much on it.

Superboy is attacking a lab, which he later discovers it’s the lab he grew up in. There is lots of action, an enemy of Superboy’s that’s utterly humiliated, and another that’s a legitimate threat to the title character. It’s not entirely clear what Superboy’s exact relation to Superman in this issue, but it’s not necessary for this issue either.

Superboy 7 was a lot of fun, and makes me want to read more. If you check it out as your first, you might just have the same reaction. The artwork is simple, yet good enough to carry the issue. If there are any problems, it’s that there’s a little too much internal exposition. Still, this is an easy recommendation. 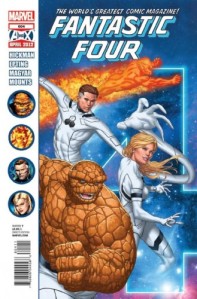 This is the penultimate issue in Jonathan Hickman’s 3-year run on the Fantastic Four/FF series. The issue explains exactly what future Franklin Richard’s plan is, and showcases the final fight to save Reed Richards from the angry Celestials. If you’ve been reading Hickman’s run, this is a satisfying climax for the story he’s been building up. If you haven’t, you should unless you specifically don’t like the Fantastic Four.

Saying too much about what happens in this issue risks spoiling all the fun. There is an intense battle between some of the most powerful entities in the Marvel Universe. There is a reunion between adult Franklin and Valeria Richards and their grandfather. There are moving scenes in the end that resemble flashback scenes from the beginning of Hickman’s run. Best of all, it’s finally revealed exactly what Franklin Richard’s powers are capable of. All this is backed up by phenomenal artwork with its realistic details and well-defined colours.

There is nothing to complain about here – it’s a satisfying conclusion to the Forever story arc and Hickman’s entire Fantastic Four run, making it an easy recommendation. While Hickman’s announced that he’s leaving the book this fall, his run isn’t over yet.

Other comics I read this week include Wolverine and the X-Men 7, X-Men Legacy 263, Batgirl 7, Batwoman 7, Incredible Hulk 6 and Scarlet Spider 3.

Wolverine and the X-Men 7 was very entertaining. Jason Aaron is doing an excellent job at balancing WATXM’s light-hearted side while still showing how dangerous the world of the X-Men is. The parallels between Wolverine and Xavier are intriguing as well.

X-Men Legacy 263 was fairly good. Rogue’s X-Men and Hope’s squad of young mutants team up against Exodus, a very powerful and semi-immortal mutant who wants to kill Cyclops. Hopefully Wolverine will appear less in this title’s future (he was in this arc a lot,) since he’s the only character in this book that needs less exposure.

Batgirl 7 was much better than Batgirl 6. The cliffhanger in particular was great and makes you want to read the next issue. This issue also dives deeper into Batgirl’s emotional struggles.

Batwoman 7 was disappointing. It was still alright, but it’s vastly inferior to the first six issues.

Incredible Hulk 6 was fun. I haven’t read enough of this series yet to say much yet, but the fight between Hulk and Banner was very entertaining. The end of this issue will definitely make you curious as to how this series will continue.

Scarlet Spider 3 was good. Even though Kaine is trying to help people, he still retains his dark and violent nature. He also makes a powerful new enemy that could lead to an awesome storyline.

I am a relatively new comic book fan writing this blog for other new comic book fans and/or people who are interested in comics but don't know where to start. I've always been interested in writing, to the point where I have a college Creative Writing Certificate and I'm currently a year 2 Journalism student. I also have another blog where I mostly make fun of bad movies - www.healed1337.blogspot.com As for how I got into comics, I've always had a passing interest in superheroes: most notably Batman, Spider-man and the X-Men. Until February of 2011 (I think,) my only experience with any of these franchises came from the movies and video games. Shortly after I bought Marvel Vs. Capcom 3 however, I decided to check out X-23, Wolverine's female clone. I ended up reading her Innocence Lost origin story and enjoyed it. From there, I started reading various X-Men comics and it quickly exploded into my newest hobby. My other interests/hobbies include video games, movies, music, playing sports, my dogs and weird news.
View all posts by healed1337 →
This entry was posted in comic review and tagged batgirl, batwoman, fantastic four, franklin richards, galactus, incredible hulk, superboy, wolverine, wolverine and the x-men, x-men, x-men legacy. Bookmark the permalink.

2 Responses to Comic reviews – Superboy 7, Fantastic Four 604 and others