Comic Review – Batman 7 and others 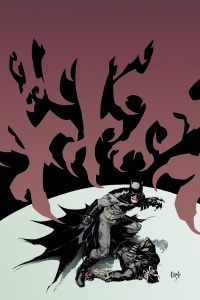 Batman spends this issue recovering from the events of Batman 6 while having several realizations of the enemy he is facing. This is a much needed quiet issue in a series that has had a relentless pace and an even more relentless dark mood. It also continues to improve on a series that is already the best of the new DC Universe.

Batman realizes in this issue that he may have been completely wrong about Gotham City and the way it works. He finally realizes his true role in the city. This issue also reveals why the Court of Owls’ assassins are as powerful as they are, and a connection they have with one of Batman’s fellow crime fighters. These revelations are fascinating, especially when you realize how many of them have been hinted at earlier in the series. Scott Snider’s tight writing manages to couple every plot twist with Batman’s determination and emotional fatigue. The final pages promise that an epic fight is coming, and this series looks like it will only get better.

The artwork is fantastic. Bruce Wayne looks tired and hurt, yet determined to defeat the Court of Owls. The environments have a creepy atmosphere, perfectly matching the book’s mood. Everything ties together perfectly, making this the best comic book of the week – maybe even by far.

The Court of Owls is a group of assassins that have been secretly controlling Gotham City for centuries, or so they claim. They targeted Batman for death, and nearly succeeded in Batman 6. Everything else you need to know is explained in this issue, although I highly recommend you read this entire series anyway – it’s a work of genius.

Justice League 7 was disappointing. It takes place five years after the last issue, but it doesn’t feel like much has changed. The same characters on the team in issue six are here with no further additions. There isn’t much depth here, there’s little character development and not much really happens. The backup story about Shazam was much better though – it almost feels like the bulk of the issue should have been about him instead. Not bad, but not worth $4 by any means.

Birds of Prey 7 was good. Several characters on the team are close to their breaking point by the end of this issue. There’s lots of action that relies more on suspense than straight up fighting – good stuff.

Amazing Spider-Man 682 starts off the Ends of the Earth event well. While there isn’t much action, Doctor Octopus’s final scheme is introduced. He plans to take over the world as his last act before he dies, and his plan actually seems plausible – from a comic book standpoint that is. Great issue overall, this event looks like it will be awesome.

Generation Hope 17 was a great finish to a series that hasn’t had the sales numbers it deserves. The final confrontation between Hope and Kinji is emotionally intense. Hope finally realizes the error in her ways, and those who remain on her team agree to give her another chance. Too bad this series is cancelled, because it was probably the most innovative series the X-Men have had in a while.

Avengers X-Sanction was alright. It was big, dumb and kind of fun while it lasted. There is no subtlety in this issue at all, which doesn’t do it any favours. Cable still felt a little out of character here and why he came back was still not adequately explained. Why did he put three of the avengers in high-tech death traps? Why didn’t he just try to explain what was going on rather than attack the avengers and risk provoking the very battle he’s trying to protect Hope from? At least this mini-series ended well for Cable, and that it hints that Cable might be involved with the AVX event. As for X-Sanction, all you need to know is that nobody died, Cable is back, and he’s completely cured of the techno organic virus. This mini-series isn’t worth reading – skip it.

New Mutants 39 was weird. I’m not sure what to think of this issue. Hmm, just after I picked up this series again too.

Uncanny X-Men 9 is about the X-Men teaming up with the Avengers one last time before this year’s Avengers vs. X-Men event. It almost feels forced in a way, but it’s still a really fun comic with an intense cliff-hanger. The flow is hurt by some of the cameos in the issue, but the shocking moment where Unit meets the hunters makes up for it. I won’t recommend this issue by itself, but the next issue might save this one.

Wolverine 303 was alright. Lots of loose ends are tied up and Sabertooth’s involvement with the story arc is justified. That said, it doesn’t really match the tone of the rest of this story arc. It feels really abrupt, almost like it should have been two issues instead of one. It’s still satisfying, but it could have been much better. There’s still one more issue in Jason Aaron’s Wolverine run, but judging by the solicits, it will have little to do with this issue.

I am a relatively new comic book fan writing this blog for other new comic book fans and/or people who are interested in comics but don't know where to start. I've always been interested in writing, to the point where I have a college Creative Writing Certificate and I'm currently a year 2 Journalism student. I also have another blog where I mostly make fun of bad movies - www.healed1337.blogspot.com As for how I got into comics, I've always had a passing interest in superheroes: most notably Batman, Spider-man and the X-Men. Until February of 2011 (I think,) my only experience with any of these franchises came from the movies and video games. Shortly after I bought Marvel Vs. Capcom 3 however, I decided to check out X-23, Wolverine's female clone. I ended up reading her Innocence Lost origin story and enjoyed it. From there, I started reading various X-Men comics and it quickly exploded into my newest hobby. My other interests/hobbies include video games, movies, music, playing sports, my dogs and weird news.
View all posts by healed1337 →
This entry was posted in comic review and tagged amazing spider-man, avengers, batman, birds of prey, cable, court of owls, generation hope, justice league, new mutants, shazam, spider-man, uncanny x-men, wolverine, x-men. Bookmark the permalink.