Comic review – Avengers vs. X-Men 5, Uncanny X-Men 13 and others 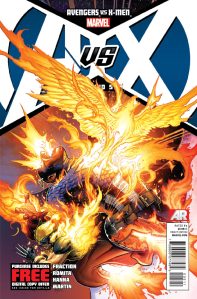 Well, this event has gone from neither side feeling sympathetic to the Avengers looking like idiots while the X-Men look incredibly self righteous. Oh, and the plot twist has Fear Itself written all over it. Sure, it was a surprise, but not the good kind. I’m seriously considering dropping this event and any direct tie-ins. At the least, I will get issue six though.

The biggest problem with this issue is that you almost have to read Uncanny X-Men 13 to know what’s going on here. Events should be self-contained, AVX is anything but. Its five issues in and the main event feels like it’s following a demanding checklist of events that must happen in each issue. There is no time for individual fights, that’s left for tie ins like Uncanny X-Men, Wolverine and The X-Men and the AVX fight issues. There’s no time for character development, that’s left to the flagship title tie-ins.

Compare this to Civil War. Sure, that event has serious problems – mainly that the pro-registration side is nearly impossible to agree with. At the very least though, that event had time to slow down. It had time to develop the main characters. Sure, the Fantastic Four and the Amazing Spider-Man tie-ins expanded on the event itself, but you can fully understand everything without touching any tie-ins. With AVX, if you don’t read the tie-ins you will miss interpret all of the characters’ actions and what’s actually happening.

As for the issue itself, the plot certainly moves forward in this issue. Heck, it almost feels like this should have been issue 1 or 2. I won’t spoil what happens in it, but it feels too much like Fear Itself. It doesn’t help that this issue’s writer, Matt Fraction, also wrote Fear Itself. It doesn’t feel anything like any previous showing of the phoenix force and because of that, it feels kind of wrong.

I can’t recommend this. The characters feel wrong, the plot twist feels wrong and … almost everything feels wrong. The only good thing I can say is that the artwork is fairly good. It’s leagues better than the artwork in issues 1-4 at the very least.

This ties directly into Avengers vs. X-Men 5, although it focuses on a completely different group of people. It mostly focuses on characters that have previously “lost” battles with the Avengers – Magneto, Psylocke (this issue explains what happened) and Storm (we never saw Storm lose anything as far as I can remember). We also see Hope’s remaining lights, and we learn the real reason for their existence through Unit.

This, as usual for Uncanny X-Men, far outshines the event itself. It’s a down issue for the most part, something this event desperately needs right now. It explains what happened in Avengers Vs. X-Men 5 and why, which should have happened in the event itself. It also carries some great character and plot development that not only ties into the event, but previous issues in Uncanny X-Men. This issue also has its own plot twist, and it both makes sense and it helps the event’s issue 5 twist …  a little.

The art is also good – it’s simple yet detailed enough to carry the issue. Apart from this being necessary for Avengers vs. X-Men 5, the only potential complaint is about Pixi’s teleportation limitation. She wonders if she’s even capable of teleporting to the moon, yet early on she was capable of teleporting to alternate dimensions like Limbo and half way across the world. This is more of a question than a complaint, but it’s still worth noting.

If you’re reading the Avengers vs. X-Men event, this issue is an absolute must. If you’re not, but you’re reading Uncanny X-Men or you read Generation Hope, this is still an easy recommendation. If none of those apply, than don’t bother with this issue. Everything you need to know is explained either in the issue or on the recap page.

The only other comics I read this week is World’s Finest 2 and Age of Apocalypse 4.

World’s Finest 2 was alright, although I don’t have much to say about it. I don’t know anything about the previous versions of either Huntress or Power Girl so I don’t feel qualified to say much more. This issue seems to jump around a bit too much and it’s not always interesting. Not really recommended unless you’re curious about Huntress and/or Power Girl.

Age of Apocalypse 4 is good, although not as good as the first three issues. I might be dropping this series, not because it’s bad, but because I need to cut back a bit.

I am a relatively new comic book fan writing this blog for other new comic book fans and/or people who are interested in comics but don't know where to start. I've always been interested in writing, to the point where I have a college Creative Writing Certificate and I'm currently a year 2 Journalism student. I also have another blog where I mostly make fun of bad movies - www.healed1337.blogspot.com As for how I got into comics, I've always had a passing interest in superheroes: most notably Batman, Spider-man and the X-Men. Until February of 2011 (I think,) my only experience with any of these franchises came from the movies and video games. Shortly after I bought Marvel Vs. Capcom 3 however, I decided to check out X-23, Wolverine's female clone. I ended up reading her Innocence Lost origin story and enjoyed it. From there, I started reading various X-Men comics and it quickly exploded into my newest hobby. My other interests/hobbies include video games, movies, music, playing sports, my dogs and weird news.
View all posts by healed1337 →
This entry was posted in comic review and tagged age of apocalypse, avengers, avengers vs. x-men, comic review, comics, generation hope, huntress, phoenix force, power girl, uncanny x-men, worlds finest, x-men. Bookmark the permalink.