No new comic series of the week because I’m working lots this week. 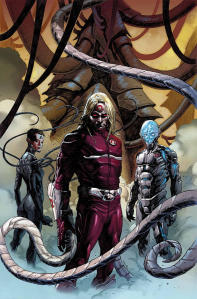 The last issue introduced the Omega clan, a group of assassins specifically created to kill X-Force. One of them somehow made Wolverine fat and bloated while AOA Nightcrawler grew old quickly. This issue explains exactly what’s going on and reveals the new Brotherhood. Add in plenty of action and a great setup for the next issue and you have another great X-Force comic.

The tension between Psylocke and Fantomex is explored a lot in this issue, partly because the brotherhood is using it against them. Psylocke’s situation is particular is emotionally brutal and digs deep into how Wolverine’s killing squad has affected her. Phil Noto’s art only increases that effect with his brilliant visual storytelling through his facial expressions and environmental detail. Ambushing them on three different fronts, the brotherhood plans to both eliminate X-Force and expose them to the world.

This is an easy recommendation and everything you need to know is on the recap page. It’s hard to say anything else without spoiling it. While it’s not as good as the Dark Angel Saga yet, it’s still worthy of Rick Remender’s Uncanny X-Force series. 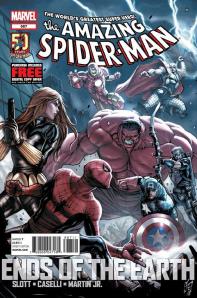 It’s difficult to sum up how I think of this issue. It’s both satisfying and disappointing. There’s a lot of action in this comic and everything in the event is solved, yet it feels like there’s too much going on. I’ll try to explain.

First, the good parts of the issue – and the event as a whole. This event was self-contained with the exception of one tie in and the epilogue being in the next issue of Avenging Spider-Man. It was short; the main event lasted only six issues (plus two issues of build-up). Despite that, it felt epic. The main fight is coherent despite its chaotic manner. The art is great as well.

A lot had to happen in this issue: a fight with the Avengers being controlled by Octobots, finding Doctor Octopus’s hidden lair, stopping Doc Oc’s plan to burn the world, there has to be a final showdown between Spider-Man and Doc Oc, and rhino must be dealt with too. Pretty much all of that somehow fits into this issue.

On the down side, everything in this issue feels rushed. The fight with the Avengers could have, and maybe should have taken up an entire issue on its own. As it is, Spider-Man, Mysterio, Black Widow and Silver Sable seem to take down the Avengers way too easily – even if they’re not at full capacity. Rhino is barely touched on. He gets two pages and that’s it. That’s just not enough panel time for one of Spider-Man’s major villains, especially with seems to be his fate (Same goes for Silver Sable).

The fight between Spider-Man and Doctor Octopus only lasts two pages before it sort-of ends. Not to mention that the fight is overcrowded with expository dialogue. This is especially disappointing since pretty much every issue in this storyline built up to their final confrontation.

While Ends of the Earth is decent, it doesn’t really feel like a Spider-Man event. Because it takes place all over the world instead of Peter Parker’s home city, New York, it feels more like an Avengers story with Spider-Man villains than anything else. That’s not exactly what people want to buy a Spider-Man comic for.

If you’ve been reading this event so far, this issue is worth checking out. Sadly, I can’t recommend Spider-Man’s Ends of the Earth (Amazing Spider-Man 682-687) to anyone who hasn’t read any of it yet, unless you’re obsessed with Spider-Man.

I am a relatively new comic book fan writing this blog for other new comic book fans and/or people who are interested in comics but don't know where to start. I've always been interested in writing, to the point where I have a college Creative Writing Certificate and I'm currently a year 2 Journalism student. I also have another blog where I mostly make fun of bad movies - www.healed1337.blogspot.com As for how I got into comics, I've always had a passing interest in superheroes: most notably Batman, Spider-man and the X-Men. Until February of 2011 (I think,) my only experience with any of these franchises came from the movies and video games. Shortly after I bought Marvel Vs. Capcom 3 however, I decided to check out X-23, Wolverine's female clone. I ended up reading her Innocence Lost origin story and enjoyed it. From there, I started reading various X-Men comics and it quickly exploded into my newest hobby. My other interests/hobbies include video games, movies, music, playing sports, my dogs and weird news.
View all posts by healed1337 →
This entry was posted in comic review and tagged black widow, brotherhood of evil mutants, comic review, comics, doctor octoups, ends of the earth, marvel comics, mysterio, rhino, silver sabel, spider-man, uncanny x-force, wolverine, x-force, x-men. Bookmark the permalink.