Nerd Journal – Highlander 2: There can be only a planet full of these losers.

Like I said about a month ago, I recently watched Highlander for the first time. I really liked it. I’ve also watched all four movie sequels since then and the first episode of the live action TV show. This post is about Highlander 2 and 3.

Highlander is a great movie classic from the 80’s. While initially unsuccessful, it slowly gained a large cult following. Eventually, the movie with the tagline “there can be only one” was no longer the only one. At the end of the movie there was only one immortal left, so how could they possibly make a sequel out of that? Well … Highlander 2 is often considered the archetypical bad sequel. 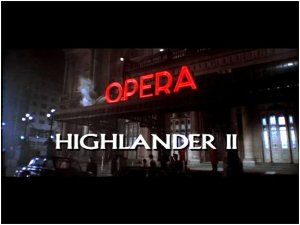 (What kind of entertainment establishment would simply call itself “opera”?)

There is so much wrong with Highlander 2 that you simply cannot understand without first watching the original. Other people have talked about its problems in greater detail than I care to, like Spoony, but I think it’s worth sharing my thoughts as a new fan.

The biggest problem with Highlander 2 is slammed into your face 15 minutes in. It not only ruins the mystery behind the immortals, but in a completely nonsense way. In the first movie, the immortals were immortal for reasons unknown to them. This movie “reveals” that they’re actually from another planet called Zeist. While they’re on Earth, they’re immortal – they can only die by decapitation. They are locked into an eternal struggle until there is only one left. The last immortal can then choose to either stay on Earth as a mortal or return to Zeist. 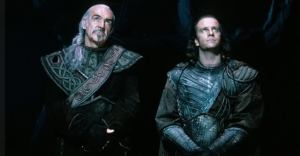 First of all, why don’t they have any memory of their home planet? Zeist is never even hinted at in the first movie. Even if there’s some sort of “space magic” that causes amnesia, they should at least have dreams or visions of their home planet. Also, why are they immortal on Earth but not on Zeist? At least in Superman’s case the reason he has his powers is because Earth’s sun gives off yellow radiation instead of his home planet’s red radiation. How does the prize even work?

(Even Sean Connery couldn’t save this mess.)

Macleod and Romirez were sent to Earth as a punishment. This makes total sense since making someone immortal is a brilliant punishment. If Macleod and Romirez were sent to Earth at the same time, why does Romirez appear on Earth 2500 years before Macleod? How is the villain, General Katana, still alive after Macleod wins the prize five hundred years later? Time on Zeist must be like time in Limbo in the Marvel Universe – it has no meaning.

(What is this? Are they getting married?)

But the worst part of the planet Zeist factoid is that it completely ruins the first movie’s tagline. There can never be only one because there’s an entire planet full of these losers. The prize is, at the most, temporary. You only have the prize until another immortal is sent to Earth, and then the game starts all over again.

The second major problem is when you break it down; the main villain is an utter fool. His punishment to Macleod and Romirez, the rebel leaders, is to make them immortal. After Macleod wins the prize, he decides to stay on Earth. There’s no way he can return to Zeist, yet Katana still sends assassins to kill him (he even waits until Macleod is old and ready to die anyway). This restarts the game and makes Macleod immortal again, and somehow he’s back in top physical shape. Instead of simply waiting for Macleod to die of old age like he should have, he screwed up the Highlander’s retirement plan and angered him. So what does he do next? He travels to Earth himself to try to kill a man with hundreds of years of sword fighting experience and tons of power thanks to all the quickenings he’s had.

(I don’t care about some planetary shield, I want to watch immortals decapitate each other.)

There are plenty more problems with Highlander 2 that I didn’t touch on like the planetary shield, the bad special effects and overly long, boring action scenes. For more details I encourage you to watch Spoony’s review. Instead, let’s briefly talk about the renegade version of Highlander 2. 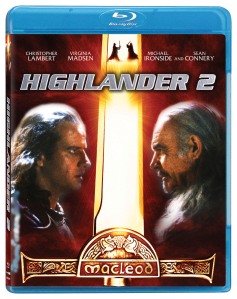 Highlander 2: Renegade edition removes all mentions of Zeist. The theatrical version of the movie has never been re-released since the initial VHS copy. Instead of Zeist, the immortals are from an ancient civilization. In a way, this makes even less sense. Somehow these people become immortal when they’re sent to the future? How does that even…

The Renegade Edition attempts to explain where the Immortals are from yet it completely fails. Katana is still an utter fool. The immortals still don’t remember their origin even though they should. If Katana can see into the future to where Macleod is an old man, can’t he just go ahead a few years and see whether Macleod dies of old age or not? Every problem with the theatrical version is still present, just in a different way. 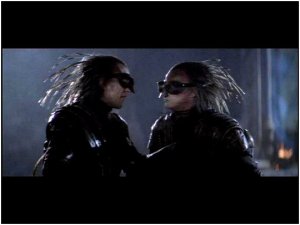 (How did Katana beat the rebels with losers like this?)

That said, there are a few things I liked about Highlander 2. There’s one cleaver scene where Macleod and Romirez take advantage of their immortality and drive into the enemy’s headquarters. They’re riddled with enough bullets to liquefy mere mortals, yet they recover in minutes and fight their way through the building. Of course, it’s ruined when you find out that the mortal love interest was in the trunk and somehow survived even though the trunk has bullet holes.

There’s another scene where Macleod falls down an elevator shaft and has to manually reset his broken bones – that was kind of neat. It’s one of several scenes that further show how immortality works. These two scenes could have been great additions to a better Highlander movie. 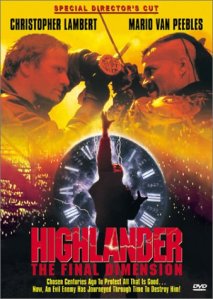 (This villain has the subtlety of a train crash at a dynamite factory.)

Highlander 3 does have some neat additions to the Immortal mythology. There’s the concept that some immortals have special powers, and the immortal that decapitates them gains those powers. Too bad Highlander 4 completely ignores the sorcerer/illusion powers that Macleod takes from the main villain.

Highlander 3 truly is the best movie sequel of the Highlander series, but that’s not saying much considering its competition. The main problem with Highlander 3 isn’t that it’s pretty much the same as the first one, but that it’s just not as fun. The movie feels slow and while it tries to be dark, it’s just dull. The generic rock music during some of the fights certainly doesn’t help. The movie has its moments – the final fight isn’t bad for example. Some of the drama isn’t too bad either. Still, everything about Highlander 3 is inferior to the original. It’s a competent sequel, but that’s it.

Enough about Highlander for a while though, next time I’ll be talking about the greatest X-Men story ever told, the Dark Phoenix Saga. It feels appropriate since Avengers vs. X-Men is about the phoenix force.

I am a relatively new comic book fan writing this blog for other new comic book fans and/or people who are interested in comics but don't know where to start. I've always been interested in writing, to the point where I have a college Creative Writing Certificate and I'm currently a year 2 Journalism student. I also have another blog where I mostly make fun of bad movies - www.healed1337.blogspot.com As for how I got into comics, I've always had a passing interest in superheroes: most notably Batman, Spider-man and the X-Men. Until February of 2011 (I think,) my only experience with any of these franchises came from the movies and video games. Shortly after I bought Marvel Vs. Capcom 3 however, I decided to check out X-23, Wolverine's female clone. I ended up reading her Innocence Lost origin story and enjoyed it. From there, I started reading various X-Men comics and it quickly exploded into my newest hobby. My other interests/hobbies include video games, movies, music, playing sports, my dogs and weird news.
View all posts by healed1337 →
This entry was posted in movie review, Nerd Journal and tagged bad movies, bad sequel, christopher lambert, conner macleod, highlander, highlander 2, highlander 3, macleod, renegade edition, romirez, sean connery, sequel, spoony, the quickening, the sorcerer. Bookmark the permalink.