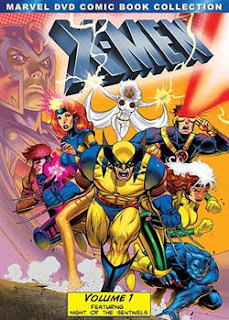 While posting my review for the Wolverine and the X-Men TV show, I noticed that I never re-posted my review of the 90’s X-Men TV show, so here it is. This was originally posted on my other blog last August. It’s time to repost it here with a few fixes.

Ah growing up in the 90’s. The decade where Yo-Yos were popular. The decade when every disagreement was settled by rock, paper, scissors. The decade of the Animaniacs and Pinky and the Brain. Ninja Turtles, Super Nintendo and Sega Genesis, and some of the worst rap music in history. Excessive sports movies, really slow internet and printers that took two minutes to print a single page. OK fine, maybe not everything in the 90’s was awesome, but you get the point. One thing I missed out on in the 90’s was all the Superhero animated shows though.

I recently watched through the entire 90’s x-men Animated Series for the first time (My mom didn’t want me to watch any superhero shoes as a kid). So does the show hold up for someone who didn’t watch it when it first aired? Is it still a good show?

Overall, the show is really good. It was also revolutionary as it was one of the first animated TV shows to have a continuing storyline throughout the first few seasons.

Rather than creating exclusively new story lines, the show based most of its episodes on well known events from the comics. Stuff like the ultra-famous dark phoenix saga all the way to a modified version of Days of Future Past that included the time traveling mutant Bishop. Most of the episodes changed details here and there to keep thing simple, but the basic premise remains the same.

The animation is a mixed bag. On the one hand, still shots look very good for a 90s cartoon. Both characters and environments are finely detailed and even facial expressions are usually well done. On the other hand, it doesn’t look too good in motion. The frame-rate is often choppy and at times characters in the background are just standing still. There are occasional continuity errors as well, like characters swapping outfits between shots (the episode titled “Nightcrawler” comes to mind).

(Have to admit, that’s one awesome “wheelchair”.)

Professor X, Wolverine, Cyclops, Jean Grey, Beast and Gambit are all portrayed well in the show. I found some of their voice actors were a little off-putting at first, but as I watched they grew on me. Rogue probably has the best voice acting of the bunch.

I wasn’t quite as fond with the portrayal of Storm or Jubilee however. Storm was alright, but having her constantly talk about what she was commanding the weather to do is annoying at times. Does she have to verbally command the wind every time she blasts enemies with it? I get that she’s a bit of a showoff and that’s part of her charm, but still.

Jubilee though, holy crap she gets annoying. In the comics she’s a spunky teenager with plenty of energy and tries to find as much joy in life as possible. She’s fun when written properly, and can bring the best out of grumpy characters like Wolverine. In the show, well…they captured the spunky nature, but does she have to be so obnoxious about it? Her voice acting’s annoying too. No wonder she didn’t appear as often in later seasons.

Jubilee’s powers aren’t explained too well either. In the show, she shoots out sparkly things from her hands that sometimes explode, often with firework sound effects. Rather than trying to explain her real powers, I’ll just copy paste from Wikipedia:

“Jubilee had the mutant power to generate bright bursts of multi-colored energy plasmoids from her fingertips. She referred to these globules as “fireworks.” The globules obeyed her mental control, traveling where she directed them, arranging themselves in balls, streamers, and other shapes, and exploding when she wished. The strength of the energy varies in degrees of power and intensity, and could range from a multitude of colorful sparkles capable of temporarily blinding a person to a powerful detonation capable of smashing objects and destroying property, or a precision burst inside a human brain, simulating the effects of a massive stroke. Jubilee could absorb the fireworks back into her own body without harm. Jubilee often referred to her powers as “pafs.” “Paf” appears in many instances as onomatopoeia for her powers.

While training in Generation X, Emma Frost described Jubilee as having the untapped potential to detonate matter at a sub-atomic level, which in theory is the equivalent of a fusion bomb. Her moral stance on taking a life was observed by Emma during the “Phalanx Covenant” when Jubilee explained her fear of killing someone should her powers ever flare up again as they did during the “Acts of Vengeance” storyline in Uncanny X-Men where she destroyed an entire house during a panicked moment. Emma Frost stated that Jubilee had unlimited potential and was one of the most powerful mutants she had ever encountered. Her Age of Apocalypse alternate had minimal qualms in this regard, and made liberal use of her full powers.”

(Jubilee is so much better in the comics)

To simplify, Jubilee is a walking atomic bomb of potential firepower. Well, she was anyway – she was depowered among with 90% of mutants after the House of M event. Instead, she’s a vampire now. Either way, you’d think a TV show that lasted 5 years would have explained her powers better.

The show has a great spotlight of different villains as well. It features everyone from mega villains like Magneto, Mr. Sinister, and Apocalypse to smaller villains like Vertigo, the Juggernaut, and even the Brood. The show even mentions the Juggernaut’s relationship to Xavier (they’re step brothers). Mr. Sinister in particular is very well portrayed in the series, and we even get an origins episode in season five (heavily modified of course).

Rather than walking through the entire show, I’m going to talk specifically about four episodes: Two really good episodes, and what I think are the worst two episodes.

Beauty & the Beast
This episode has the distinction of being the most dramatic single episode of the series by far. Beast develops a special procedure to allow blind people to see again. He and his first patient end up falling in love, even though he’s a mutant with blue fur. She gets kidnapped by an anti-mutant group and Beast goes berzerk. Meanwhile, Wolverine infiltrates the same group and uses his brain to conquer the hate group. It’s a well done episode that really makes you care about Beast, and the temperment switch between Beast and Wolverine is not only entertaining, but completely believable in how it’s handled. There are several better episodes, but this one really stands out in it’s dramatic tone. 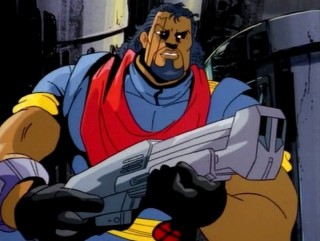 This two-parter is probably the best part of the entire series. The story includes two time-traveling mutants, Bishop and Cable, both trying to save their future from an engineered plague (loosely based on the legacy virus). Bishop heads into the past first, trying to stop the plague from ever breaking out. The problem is that Bishop’s somewhat rash methods end up destroying both the X-men and Cable’s future. Cable travels back to stop Bishop, but ends up saving everyone’s future thanks to one character’s unique mutant abilities. I won’t spoil it in case you decide to watch it, but it’s a satisfying conclusion to an epic two-parter. 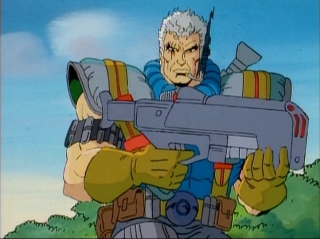 Mojovision
This episode is annoying, very annoying. It’s mostly about the villain Mojo kidnapping the X-Men into some alternate dimmension where he hosts a gladiator TV show of some sort. This episode doesn’t explain anything that’s going on. Mojo himself is the most annoying character in the entire series, constantly blabbering on about his ratings like he came from a crappy loony tunes cartoon. This is the only episode I’ve only watched once.

Jubilee’s Fairy Tale Theater
This episode is loosely based of a comic when Kitty Pryde (the X-man that can walk through walls) is telling stories to Collosus’s young sister Illyana. The original comic, Uncanny X-Men 153 is charming, fun and introduces several characters that later enter the X-Men universe. The stories are loosly based on battles that the X-Men had previously fought and it’s a rather unique point of view. If you can find this comic, read it. In this TV episode however, Jubilee is leading a group of kids through a cave, and starts telling them stories after they get caved in.

Jubilee is easily the most annoying character in the show’s regular cast, and this episode proves that beyond a shadow of a doubt. The fairy tale is stupid too, and any charm the original comic had is completely lost in this version. If you ever watch the TV show all the way through, you would do better to skip this episode. 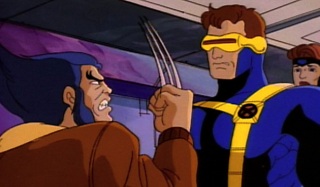 (Cyclops and Wolverine are best of friends)

Final thoughts? If you have any interest in the X-men and want to try out the comics, this is a decent show for finding out some of the franchises back-story. It’s rarely as good as the original stories it’s based on, but it’s easier to find and for the most part, it’s an easy watch. Most of the shows episodes can be watched on Marvel’s official website for free, but I watched the show on the DVD volumes (the entire series collected in 5 DVD sets.) When it’s good, it’s great. When it’s great, it’s better than any of the X-Men movies so far. On the other hand. when it’s bad, it’s really bad.

I’d recommend not starting with the first two episodes and either starting with Enter Magneto (episode 3,)  Days of Future Past (episodes 11 and 12,) or The Dark Phoenix Saga (episodes 40-43.)

I am a relatively new comic book fan writing this blog for other new comic book fans and/or people who are interested in comics but don't know where to start. I've always been interested in writing, to the point where I have a college Creative Writing Certificate and I'm currently a year 2 Journalism student. I also have another blog where I mostly make fun of bad movies - www.healed1337.blogspot.com As for how I got into comics, I've always had a passing interest in superheroes: most notably Batman, Spider-man and the X-Men. Until February of 2011 (I think,) my only experience with any of these franchises came from the movies and video games. Shortly after I bought Marvel Vs. Capcom 3 however, I decided to check out X-23, Wolverine's female clone. I ended up reading her Innocence Lost origin story and enjoyed it. From there, I started reading various X-Men comics and it quickly exploded into my newest hobby. My other interests/hobbies include video games, movies, music, playing sports, my dogs and weird news.
View all posts by healed1337 →
This entry was posted in tv show and tagged 90's x-men, apocalypse, bishop, cable, cyclops, dark phoenix saga, days of future past, jean grey, jubilee, kitty pryde, legacy virus, magneto, Mojo, mr. sinister, shadowcat, the juggernaut, x-men, x-men 90's animated, x-men animated. Bookmark the permalink.