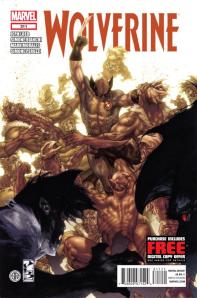 This is the second issue of a 4-part arc explaining how Sabertooth returned to the Marvel Universe. It feels a bit late considering he’s been around for a while. He showed up in Wolverine and the X-Men well before Avengers vs. X-Men started, and in Wolverine’s series the same week he first showed in WATXM. Even ignoring that, this issue is just bad.

There will be spoilers, but that’s in hopes that you can save your $4 for a better comic.

The first issue revealed that Romulus is back, and that Sabertooth has been cloned … again. In this issue, it was revealed that Wolverine never actually killed Sabertooth – he just killed a Sabertooth clone. Not only that, but it reveals that the redhead that helped Wolverine happens to be Romulus’s twin sister, Remus, and wants Wolverine’s help to kill him. Why do we need to know about Romulus and Remus to know how Sabertooth returned?

Even ignoring those problems, this issue is a very short read. I finished it in 5 minutes, and this thing is $4. Even then, it feels rushed. This issue has four different colourists, and the change in the comic’s look is very distracting. Worse yet, there’s a panel where they completely forgot to colour Romulus’s sister’s costume – it’s just white.

If there’s anything positive to say about this comic, it’s that the action is kind of fun. Even so, it’s little hard to take the fight scenes seriously when Wolverine is single-handedly fighting off five Sabertooth clones all at once when in Jeph Loeb’s previous Sabertooth story arc, Wolverine had trouble with one.

I simply cannot recommend this issue. All you really need to know is that Wolverine only decapitated Sabertooth’s clone, not Sabertooth himself. With that knowledge, you can save yourself $4 on this issue, and possibly $16 on this story arc.

I am a relatively new comic book fan writing this blog for other new comic book fans and/or people who are interested in comics but don't know where to start. I've always been interested in writing, to the point where I have a college Creative Writing Certificate and I'm currently a year 2 Journalism student. I also have another blog where I mostly make fun of bad movies - www.healed1337.blogspot.com As for how I got into comics, I've always had a passing interest in superheroes: most notably Batman, Spider-man and the X-Men. Until February of 2011 (I think,) my only experience with any of these franchises came from the movies and video games. Shortly after I bought Marvel Vs. Capcom 3 however, I decided to check out X-23, Wolverine's female clone. I ended up reading her Innocence Lost origin story and enjoyed it. From there, I started reading various X-Men comics and it quickly exploded into my newest hobby. My other interests/hobbies include video games, movies, music, playing sports, my dogs and weird news.
View all posts by healed1337 →
This entry was posted in comic review and tagged comic review, comics, jeph loeb, remus, romulus, sabertooth, wolverine. Bookmark the permalink.