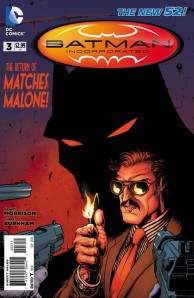 It’s been two months since the last issue of Batman Incorporated. This issue was delayed because of the Colorado shooting last month – very respectful of DC comics to do that. As for the comic itself, is the wait worth it?

Even if you haven’t read the first two issues (which I recommend that you do) this issue isn’t hard to follow at all. The first issue was really just Batman and Robin (Damien Wayne) working together in an investigation where they found genetically altered cows, and Robin was seemingly killed. The second issue was all about Talia Al Ghul taking over the league of assassins and making her father proud.

This issue is where the story really starts to move. The first few pages are all about Talia’s league of assassins infiltrating Gotham City in an initiative called leviathan. The rest of the book covers Batman’s investigation into leviathan. There are a lot of different elements that fit together, and the last few pages set up the next issue nicely. Not much else can be said without spoiling this issue.

The art is also strong in this; almost flawless even. Even when characters look similar (Robin looks similar to a crime boss), it’s easy to tell them apart. There are several pages where the art is allowed to tell the story and it’s done well. There are little touches in the backgrounds that make nearly every panel look complete.

This comic is simply great. The story is compelling, the art is great and you won’t feel lost if this is your first issue in the series. If you like Batman, check this comic out.

I am a relatively new comic book fan writing this blog for other new comic book fans and/or people who are interested in comics but don't know where to start. I've always been interested in writing, to the point where I have a college Creative Writing Certificate and I'm currently a year 2 Journalism student. I also have another blog where I mostly make fun of bad movies - www.healed1337.blogspot.com As for how I got into comics, I've always had a passing interest in superheroes: most notably Batman, Spider-man and the X-Men. Until February of 2011 (I think,) my only experience with any of these franchises came from the movies and video games. Shortly after I bought Marvel Vs. Capcom 3 however, I decided to check out X-23, Wolverine's female clone. I ended up reading her Innocence Lost origin story and enjoyed it. From there, I started reading various X-Men comics and it quickly exploded into my newest hobby. My other interests/hobbies include video games, movies, music, playing sports, my dogs and weird news.
View all posts by healed1337 →
This entry was posted in comic review and tagged batman, batman and robin, batman incorporated, comic review, comics, damien wayne, dc comics, league of assassins, new DC Universe, robin, talia al ghul. Bookmark the permalink.