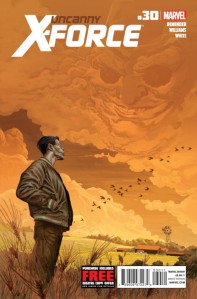 In Uncanny X-Force 27, the new Brotherhood of Evil Mutants kidnapped Even, who is quite possibly the most powerful mutant at Wolverine’s new school. This issue is all about the new Brotherhood trying to corrupt Even as they tell him the truth about his heritage.

This is a very well done issue. It’s not necessarily entertaining, but it’s deep. If you’ve been reading Uncanny X-Force so far, this is an important issue as it might make you re-think the entire series. The scene at the gas station is the perfect example of this (I won’t spoil it here). UXF has often been about the consequences of killing, but it’s never been more hard-hitting than in this issue.

The art is great too. Facial expressions are well handled as Even goes through pretty much every negative emotion in existence. There are plenty of environmental details and atmospheric effects, especially when the Shadow King is playing with Kid Apocalypse’s mind.

If you’ve been reading Uncanny X-Force so far, it’s important that you at least read this issue too. If you haven’t yet tried it, this is a decent issue to start with since pretty much everything is explained within the issue itself. It’s not a fun issue, even if watching Sabertooth and Daken randomly killing people is somewhat amusing. It’s a very deep issue that questions the true meaning of the words “hero” and “villain”.

I am a relatively new comic book fan writing this blog for other new comic book fans and/or people who are interested in comics but don't know where to start. I've always been interested in writing, to the point where I have a college Creative Writing Certificate and I'm currently a year 2 Journalism student. I also have another blog where I mostly make fun of bad movies - www.healed1337.blogspot.com As for how I got into comics, I've always had a passing interest in superheroes: most notably Batman, Spider-man and the X-Men. Until February of 2011 (I think,) my only experience with any of these franchises came from the movies and video games. Shortly after I bought Marvel Vs. Capcom 3 however, I decided to check out X-23, Wolverine's female clone. I ended up reading her Innocence Lost origin story and enjoyed it. From there, I started reading various X-Men comics and it quickly exploded into my newest hobby. My other interests/hobbies include video games, movies, music, playing sports, my dogs and weird news.
View all posts by healed1337 →
This entry was posted in comic review and tagged apocalypse, brotherhood of evil mutants, comic review, comics, daken, genesis, kid apocalypse, marvel comics, sabertooth, shadow king, uncanny x-force, wolverine, x-force. Bookmark the permalink.