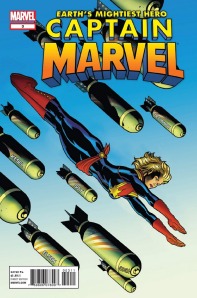 Captain Marvel 3 continues Carol Danvers’ story of being trapped back in time. More specifically, she’s stuck in World War 2 with an all-female squad of soldiers fighting against Japanese who have access to Kree technology. This comic is surprisingly awesome.

This comic does a great job at explaining how Captain Marvel (previously called Miss Marvel) acquired her powers to new readers. There’s also some good character development for both the captain and the squad she’s working with. Where this issue really shines though is Marvel’s intimidation speech after the first fight scene – it’s almost as good as Wolverine’s intimidation speech in the Dark Phoenix Saga. She lets the captured Japanese soldier go and tells him to make sure they’re ready for the next fight. It’s just awesome. The cliffhanger is intense too.

These time travel plots can be risky, especially to kick a series off. They’ve been done so many times that it’s hard to be unique. This one does a good job at setting itself apart not only by giving Captain Marvel a familiar problem, but by making the title character more willing to unleash herself and not worry about the consequences to the time stream. As of now, it’s not clear where this time travel plot is heading. Yet there are still hints that this story arc is just a small piece of a larger story.

The art is good too. It’s a great combination of visual effects, colouring and the occasional foreground work. The facial work is great too – sometimes they’re all you need to know what characters are thinking.

While I enjoyed the previous two issues, I wasn’t quite convinced to stick with this comic. I’ve never cared much for Carol Danvers in the past, yet three issues are all it took for Kelly Sue DeConnick to make me like her. This issue has convinced me to give this series a chance for the long run. It’s fun and packed with several simply awesome moments. If you wanta good, fun comic that has nothing to do with Avengers vs. X-Men, you should at least check this comic out.

I am a relatively new comic book fan writing this blog for other new comic book fans and/or people who are interested in comics but don't know where to start. I've always been interested in writing, to the point where I have a college Creative Writing Certificate and I'm currently a year 2 Journalism student. I also have another blog where I mostly make fun of bad movies - www.healed1337.blogspot.com As for how I got into comics, I've always had a passing interest in superheroes: most notably Batman, Spider-man and the X-Men. Until February of 2011 (I think,) my only experience with any of these franchises came from the movies and video games. Shortly after I bought Marvel Vs. Capcom 3 however, I decided to check out X-23, Wolverine's female clone. I ended up reading her Innocence Lost origin story and enjoyed it. From there, I started reading various X-Men comics and it quickly exploded into my newest hobby. My other interests/hobbies include video games, movies, music, playing sports, my dogs and weird news.
View all posts by healed1337 →
This entry was posted in comic review and tagged captain marvel, comic review, comics, kelly sue deconnick, kree, marvel comics, miss marvel, world war 2. Bookmark the permalink.