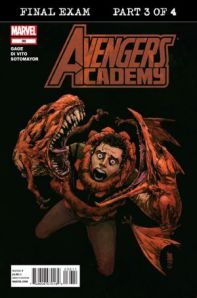 This is the third issue in the four part Final Exam story arc. The Academy kids are working together to stop Jeremy Briggs from de-powering the vast majority of super powered beings on Earth. Most of the Academy kids also have personal issues to work through – issues they’ve been facing since the start of the series. Like the last two issues, this one is simply excellent.

There’s a scene where Hazmat and Mettle learn to live with their powers. X-23 is slowly dying of adamantium poisoning and battle wounds without her healing factor, yet she remains as tough as usual. Every academy kid has at least a small moment for character development in this issue.

The plot is still just as interesting as before. If Briggs successfully releases “clean slate” across the globe, most of Earth’s superheroes will be de-powered. This will leave Earth open to an invasion, something Briggs fails to realize. The issue ending cliffhanger proves how urgent the situation truly is.

The art isn’t quite as good as the comic is. With the exception of Hazmat’s nuclear energy affecting Mettle’s skin and the environment, there are hardly any fine details anywhere. There are plenty of incomplete and/or boring backgrounds. The worst part is probably the Youngblood’s Disease (too many needlessly closed or purely white eyes, a term coined by Linkara). Also, X-23’s eyes are still the wrong colour (they’re supposed to be green, a common pet peeve for X-23 fans). It’s not necessarily bad, but the art has consistently held this series back and this issue is no exception.

Apart from the mediocre art, this issue is simply amazing. It’s deeper than a 20-page comic should be yet there’s still plenty of room for action. It’s easy to understand for new readers, even without the recap page. That said, I recommend you hunt down the previous two issues since they’re equally good. In fact, this entire series is worth checking out. If you like comics about teenage superheroes and you haven’t read this series yet, what are you waiting for?

I am a relatively new comic book fan writing this blog for other new comic book fans and/or people who are interested in comics but don't know where to start. I've always been interested in writing, to the point where I have a college Creative Writing Certificate and I'm currently a year 2 Journalism student. I also have another blog where I mostly make fun of bad movies - www.healed1337.blogspot.com As for how I got into comics, I've always had a passing interest in superheroes: most notably Batman, Spider-man and the X-Men. Until February of 2011 (I think,) my only experience with any of these franchises came from the movies and video games. Shortly after I bought Marvel Vs. Capcom 3 however, I decided to check out X-23, Wolverine's female clone. I ended up reading her Innocence Lost origin story and enjoyed it. From there, I started reading various X-Men comics and it quickly exploded into my newest hobby. My other interests/hobbies include video games, movies, music, playing sports, my dogs and weird news.
View all posts by healed1337 →
This entry was posted in comic review and tagged avengers, avengers academy, christos gage, coat of arms, comic review, comics, hazmat, jeremy briggs, marvel comics, mettle, reptil, white tiger, x-23. Bookmark the permalink.