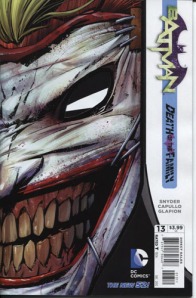 The Joker has been absent for a year. Last we saw him, the skin on his face was cut off, and his face has been in police custody since (this happened in Detective Comics 1). I’m not sure how long it’s been since the Joker has had a big story (the only Batman story I’ve read outside of the new 52 is The Killing Joke). This comic kicks off “Death of the family”, a bat family-wide event (excluding Batwoman) where Batman’s greatest villain returns with a vengeance.

This comic is dark – maybe darker than Christopher Nolan’s The Dark Knight. The Joker’s first action in his return resulted in a terrified Commissioner Gordon in a room full of dead cops. The Joker’s plans are so twisted that long-time allies of his are saying that the Joker isn’t who he used to be. He’s threatening to destroy the entire bat family.

This comic is also very good. There is a lot of focus on Gordon and how strong a leader he is, despite his fear. Gordon’s scenes work very well, especially his conversation with Batman in the middle of the issue. Batman is in this issue a lot, but there isn’t much focus on him. The true stars of this issue are the Joker and Gordon. The backup story focuses on a third character, but saying who it is would spoil this issue’s main twist.

The art is also very good. At first glance it’s a simple looking book, yet there are plenty of environmental and atmospheric details. The page layout where Batman is communicating with his various allies has a neat setup, with each extra panel extending out of Batman’s cape. When the art needs to look gruesome, it looks appropriately gruesome without being over the top. I can’t think of any complaints about the art.

Needless to say, this is an easy recommendation for fans of either Batman or the Joker. As the first issue in this storyline, it’s very easy for new readers to understand. By the way, this comic’s ending referenes the Killing Joke graphic novel , which is quite possibly the best Joker story ever told – it’s hardcover should be relatively easy to find if you wanted to check that out.

I am a relatively new comic book fan writing this blog for other new comic book fans and/or people who are interested in comics but don't know where to start. I've always been interested in writing, to the point where I have a college Creative Writing Certificate and I'm currently a year 2 Journalism student. I also have another blog where I mostly make fun of bad movies - www.healed1337.blogspot.com As for how I got into comics, I've always had a passing interest in superheroes: most notably Batman, Spider-man and the X-Men. Until February of 2011 (I think,) my only experience with any of these franchises came from the movies and video games. Shortly after I bought Marvel Vs. Capcom 3 however, I decided to check out X-23, Wolverine's female clone. I ended up reading her Innocence Lost origin story and enjoyed it. From there, I started reading various X-Men comics and it quickly exploded into my newest hobby. My other interests/hobbies include video games, movies, music, playing sports, my dogs and weird news.
View all posts by healed1337 →
This entry was posted in comic review and tagged batman, comic review, comics, commissioner gordon, dc comics, death of the family, new 52, the joker, the killing joke. Bookmark the permalink.