Christmas Week 5 – This Time of Year 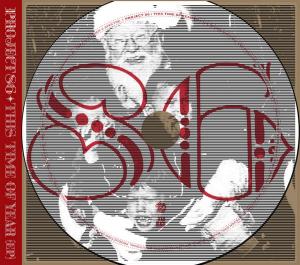 Earlier this week I posted about my most hated Christmas songs. Just because I’ve grown to dislike Christmas music in general though, doesn’t mean that I don’t like any Christmas music. In fact, I love Project 86’s This Time of Year EP.

Project 86 is a fairly unique band. They fall into the general rock/metal/alternative/post-hardcore area, but I’ve never heard anyone else like them (save for their first album, which was basically Rage against the Machine without the language). They are considered a Christian band, but their poetic lyrics cover a broad range of topics.

This time of year – http://www.youtube.com/watch?v=SFCXqmDytdw

This Time of Year in particular focuses on the downside of the Christmas season. “This Time of Year” is a creepy sounding Christmas song that works very well. “Shiny Skin” focuses on how some people tend to focus on presents more than anything else about the holiday. “Wrought on this Holiday’s Eve” isn’t about Christmas as much as it’s about a really bad example of a father. “What Child” is an instrumental based on “What Child is This” to close the album.

The song that stands out the most to me is “Misfit Toys” though. This song is about those who are broken and lonely – the holiday season can be particularly tough on them. I’m not one of them – I have a large extended family that always gets together for Christmas, and everyone gets along.

This song touches me because a few years ago, a co-worker of mine committed suicide between Christmas and New Year’s. At work, he was always smiling and he was friendly with everyone. Nobody knew he was lonely – nobody saw it coming. This song reminds me of him, and of others who are similarly lonely. There’s more than one meaning behind this song, but that’s how it touches me.

As far as I know, this album is only available through iTunes. They came out with another Christmas single this year – It Came Upon the Midnight Clear – also good.

I am a relatively new comic book fan writing this blog for other new comic book fans and/or people who are interested in comics but don't know where to start. I've always been interested in writing, to the point where I have a college Creative Writing Certificate and I'm currently a year 2 Journalism student. I also have another blog where I mostly make fun of bad movies - www.healed1337.blogspot.com As for how I got into comics, I've always had a passing interest in superheroes: most notably Batman, Spider-man and the X-Men. Until February of 2011 (I think,) my only experience with any of these franchises came from the movies and video games. Shortly after I bought Marvel Vs. Capcom 3 however, I decided to check out X-23, Wolverine's female clone. I ended up reading her Innocence Lost origin story and enjoyed it. From there, I started reading various X-Men comics and it quickly exploded into my newest hobby. My other interests/hobbies include video games, movies, music, playing sports, my dogs and weird news.
View all posts by healed1337 →
This entry was posted in christmas week and tagged alternative metal, christmas music, christmas week, metal, music, project 86. Bookmark the permalink.