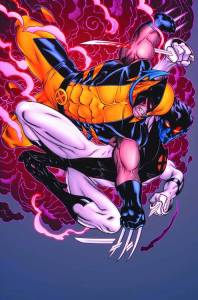 I originally planned on not following this crossover at all. It just didn’t interest me, and I wanted to take a break from reading event comics after last year’s exhausting Avengers vs. X-Men. Today, I decided to buy the first issue on impulse. Was it worth it?

This comic is … satisfactory. It does a decent job at explaining what the story is about, introducing the three teams involved and setting the crossover’s scale. It primarily focuses on AOA Nightcrawler, which is appropriate since he sort of causes the events that transpire in this issue. His characterization is good enough, as are his various interactions.

There’s also a fair amount of focus Wolverine’s team from Astonishing X-Men as they try to track Kurt down, and the Age of Apocalypse team after Kurt returns. It would have been nice to see more of the X-Treme X-Men team though – they’re only in the last five pages, and they don’t get much dialogue or story focus. The writing itself is passable, but it feels dry at times.

The best part of the comic is the art. The opening page is nicely illustrated to show the dimensional barriers between different Earths cracking. Facial expressions are well done, except that maybe characters’ teeth are shown off a bit too much. Each scene is well established with at least one background shot, and different dimensional versions of the same characters are easily distinguishable, yet recognizable.

This issue is best described as mediocre. The crossover has potential, which makes me wonder why they started it off David Lapham as the writer (his series, Age of Apocalypse, is the one that’s being cancelled). If you were planning on reading this crossover, this is worth picking up. If you were on the fence, read it before you buy it. If you weren’t planning on following it, this issue isn’t good enough to recommend. Whether I pick up the next issue (Astonishing X-Men 60) will depend on how crowded my pick list is that week.

I am a relatively new comic book fan writing this blog for other new comic book fans and/or people who are interested in comics but don't know where to start. I've always been interested in writing, to the point where I have a college Creative Writing Certificate and I'm currently a year 2 Journalism student. I also have another blog where I mostly make fun of bad movies - www.healed1337.blogspot.com As for how I got into comics, I've always had a passing interest in superheroes: most notably Batman, Spider-man and the X-Men. Until February of 2011 (I think,) my only experience with any of these franchises came from the movies and video games. Shortly after I bought Marvel Vs. Capcom 3 however, I decided to check out X-23, Wolverine's female clone. I ended up reading her Innocence Lost origin story and enjoyed it. From there, I started reading various X-Men comics and it quickly exploded into my newest hobby. My other interests/hobbies include video games, movies, music, playing sports, my dogs and weird news.
View all posts by healed1337 →
This entry was posted in comic review and tagged age of apocalypse, astonishing x-men, comic review, comics, David Lapham, event comics, marvel comics, marvel now, x-men, x-termination, x-treme x-men. Bookmark the permalink.