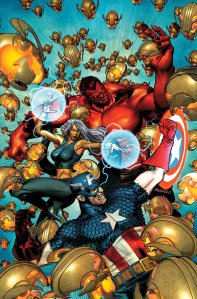 The pace really picks up in this issue of Age of Ultron. In the last issue, the remaining superheroes of Earth discovered a time machine. Most of them decided to travel into the future to fight Ultron directly, while Wolverine and Invisible Woman decided to go back to the past to stop Ultron from being created. What follows is an action-packed issue that still has a lot of time for both story and character development, and it’s very good.

The scenes in the future are simply intense, as we at last see exactly how powerful Ultron has become. Every last building in New York has been replaced with a single AI structure, and the skies are filled with flying Ultron heads. Nick Fury’s team stands no hope against the horde, and they are overwhelmed fast. The art here is simply impressive. The landscape is familiar, yet the overall appearance is simply unrecognizable in what was once the Marvel Universes sort-of capital city.

This issue’s real drama comes from the scenes in the past however. The moral debate between Invisible Woman and Wolverine is very well written, and they both feel perfectly in character. It’s also neat that we get to see the exact moment that Hank Pym came up with the idea that would eventually become Ultron. This comic’s ending is a bit surprising; not in what happens, but that it happened this soon in the event. The next few issues could be very interesting.

I’ve read complaints online about how several characters have been killed throughout this event with very little attention afterward. It’s easy to miss, but in this issue Captain America’s head is blown clean off in the last few pages. Personally, I don’t have a problem with this. It’s clear that while this event’s end results may affect the Marvel Universe, Steve Rogers’ death will not last long. It was prevented mere pages after he was killed in this issue.

There’s also the well-established fact that time travel cannot change the past in the Marvel Universe. All it does is create new timelines AKA Age of Apocalypse. While it remains to be seen exactly how this will change things, it’s clear that AU doesn’t take place in the 616 universe – it’s just one possible future. I shouldn’t say anything for sure yet, but it’s too early to judge how the 616 Universe will change. Judging by a lot of past Marvel events, any changes won’t last for too long.

This is shaping up to be the best Avengers event in a long time, and certainly Brian Michael Bendis’s best by far. Unlike most, it’s relatively self-contained and well-paced. It’s not necessarily perfect, and four remaining issues is plenty enough for the event to fall apart. This post-apocalyptic world ruled by an artificial intelligence may not be for everyone, but so far it’s well worth reading for anyone who may find this kind of story interesting.

I am a relatively new comic book fan writing this blog for other new comic book fans and/or people who are interested in comics but don't know where to start. I've always been interested in writing, to the point where I have a college Creative Writing Certificate and I'm currently a year 2 Journalism student. I also have another blog where I mostly make fun of bad movies - www.healed1337.blogspot.com As for how I got into comics, I've always had a passing interest in superheroes: most notably Batman, Spider-man and the X-Men. Until February of 2011 (I think,) my only experience with any of these franchises came from the movies and video games. Shortly after I bought Marvel Vs. Capcom 3 however, I decided to check out X-23, Wolverine's female clone. I ended up reading her Innocence Lost origin story and enjoyed it. From there, I started reading various X-Men comics and it quickly exploded into my newest hobby. My other interests/hobbies include video games, movies, music, playing sports, my dogs and weird news.
View all posts by healed1337 →
This entry was posted in comic review and tagged age of ultron, avengers, brian michael bendis, comic review, comics, event comics, hank pym, invisible woman, marvel comics, marvel now, nick fury, ultron, wolverine. Bookmark the permalink.

2 Responses to Age of Ultron 6 review