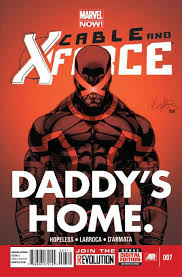 Cable and X-Force has had a surprisingly good character focus so far, especially considering how action oriented most Cable focused books have been in the past. There’s still plenty of action and weirdness as usual for the character, but it usually takes a backseat to character development. While this entry isn’t as character focuses as most, it’s still strong in that department.

In this issue, Cable’s team is trying to move a dangerous intergalactic prisoner without any authorization from SWORD. The team is divided into four different groups for most of this comic, and yet it’s never confusing. While the scenes with Forge and Dr. Nemesis in the space ship feel a bit distanced from the others, everything ends up connecting in the end. Besides, their friendly rivalry is always entertaining. Domino’s scenes are particularly awesome with her always entertaining dialogue with both Colossus and Boom Boom.

The only serious disappointment is that the conversation between Cyclops and Cable is a bit short, especially considering the cover has Cyclops with the words “Daddy’s home”. They work together and converse, but there isn’t all that much catching up between them. Cyclops says that he supports what Cable’s doing; otherwise their scenes are only used to further discuss the plot. It’s the same complaint I had about Hope’s short appearance in issue 5. In both cases they’re well written, but they probably should have taken up more panel time considering they were both on the cover. Admittedly though, Cyclops is in this issue more than Hope was in 5.

As usual for Cable and X-Force, the art is very good. Characters are drawn with plenty of detail and their facial expressions are pretty much perfect. Every scene is complete with detailed backgrounds, especially when the alien prisoner is released. Even with Boom Boom in a revealing bikini, it doesn’t feel exploitive.

Cable is among my favourite X-men characters, and it’s great to see that Dennis Hopeless is doing him justice so far. It’s not a flawless book, but it’s a lot of fun with some good character work behind it. Whether you’re a Cable fan, a fan of any of the other characters on this team, or are interested in a mutant outlaw team that’s separate from the X-Men, this is an easy recommendation.

I am a relatively new comic book fan writing this blog for other new comic book fans and/or people who are interested in comics but don't know where to start. I've always been interested in writing, to the point where I have a college Creative Writing Certificate and I'm currently a year 2 Journalism student. I also have another blog where I mostly make fun of bad movies - www.healed1337.blogspot.com As for how I got into comics, I've always had a passing interest in superheroes: most notably Batman, Spider-man and the X-Men. Until February of 2011 (I think,) my only experience with any of these franchises came from the movies and video games. Shortly after I bought Marvel Vs. Capcom 3 however, I decided to check out X-23, Wolverine's female clone. I ended up reading her Innocence Lost origin story and enjoyed it. From there, I started reading various X-Men comics and it quickly exploded into my newest hobby. My other interests/hobbies include video games, movies, music, playing sports, my dogs and weird news.
View all posts by healed1337 →
This entry was posted in Uncategorized and tagged aliens, boom boom, cable, cable and x-force, comic review, comics, cyclops, dennis hopeless, domino, dr nemesis, forge, marvel comics, marvel now, SWORD, x-force, x-men. Bookmark the permalink.

2 Responses to Cable and X-Force 7 review