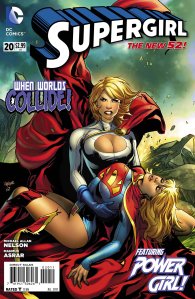 Supergirl and Power Girl met for the first time in the last issue, which also happened to be Mike Johnson’s last issue as the book’s writer. While Supergirl’s series has had its ups and downs (most of the downs were related to the lackluster H’el on Earth crossover), Supergirl has consistently been the best of the non-Action Comics superman related books. Enter new writer, Michael Allen Nelson (I’ve never read anything of his before).

This issue is very entertaining from start to finish. All you have to do is read the preview pages, and that’s a good indication of what this entire issue is like. The constant banter between Supergirl, Power Girl and Sanctuary is amazing. Who knew a dispassionate computer voice could be so hilarious, especially when it’s trying to kill “the clone”.

At the same time, both Supergirl and Power Girl have a decent amount of character development. The last page where the two watch the sunrise together is a nice little scene that gives them a chance to properly connect. I don’t know what their relationship was like in the previous DC Universe, but it’s nice that they get along here.

If there is anything to complain about, it’s that the action scene almost takes up the full issue. While that’s not really a problem considering how entertaining it was, one could argue that there wasn’t enough time spent outside of sanctuary. Add the fact that half of the last issue was also in Sanctuary, and we’ve spent a little too much time there lately.

The art is also great. While it’s simple at first glance, there is plenty of detail, especially when Supergirl is fighting against Sanctuary. There are a lot of weird sciency things attacking Supergirl, and there’s a great use of background and foreground throughout. Power Girl appropriately looks like an older version of Supergirl, and they’re distinctive enough that you’d recognize who is who even without their different costumes.

While it’s too early to tell whether it will continue to be good or not, Nelson’s off to a great start with this series. Whether you’re a Supergirl fan, a Power Girl fan who is disappointed with her lackluster portrayal in World’s Finest, or are simply interested in checking out Superman’s family, this is an easy recommendation. Everything you need to know is explained in the comic itself.

I am a relatively new comic book fan writing this blog for other new comic book fans and/or people who are interested in comics but don't know where to start. I've always been interested in writing, to the point where I have a college Creative Writing Certificate and I'm currently a year 2 Journalism student. I also have another blog where I mostly make fun of bad movies - www.healed1337.blogspot.com As for how I got into comics, I've always had a passing interest in superheroes: most notably Batman, Spider-man and the X-Men. Until February of 2011 (I think,) my only experience with any of these franchises came from the movies and video games. Shortly after I bought Marvel Vs. Capcom 3 however, I decided to check out X-23, Wolverine's female clone. I ended up reading her Innocence Lost origin story and enjoyed it. From there, I started reading various X-Men comics and it quickly exploded into my newest hobby. My other interests/hobbies include video games, movies, music, playing sports, my dogs and weird news.
View all posts by healed1337 →
This entry was posted in comic review and tagged comic review, comics, dc comics, kara zor-el, karen zor-el, Michael Allen Nelson, new 52, power girl, sanctuary, supergirl, superman. Bookmark the permalink.