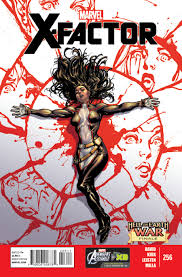 The Hell on Earth War has simply been epic. It’s a storyline that Peter David has been teasing for years now, and not just in X-Factor. The different lords of hell are competing to kill the 7 billionth person born on Earth (Rahne’s son), and the winner is crowned the king (or queen) of all hells. Despite all the build-up, this storyline manages to be perfectly easy to understand, even for the new comic reader. It’s also been nearly perfect the whole time, and this issue is no exception.

This issue has it all – humour, drama, character development, plenty of action and good artwork, all packed into a tight and coherent narrative. The opening pages with Polaris tearing through Mephisto’s armies with her magnetic powers alone and tears dripping from her eyes is a striking image and perfectly sets the tone for the rest of the comic.

The bulk of this issue remains focused on Mephisto, his armies and X-Factor. They’re each explained in such a way that even if you haven’t been reading this storyline up until now, it’s still fairly easy to understand what’s going on. Most of the storylines are resolved in this issue, and I’m sure the remaining threads will be concluded in the next issue.

The ending itself is quite the surprise. The winner makes sense, yet you won’t see it coming. His/her motivations for becoming hell lord are made perfectly clear, and it will be interesting to see if Marvel sticks with this, and how it will affect the underworld if it does.

This is how a large-scale event should be written. It’s entirely self-contained, doesn’t have an overreliance on continuity and it still has a strong character focus. If you’re a regular X-Factor reader, you’re most likely already reading this. Even if you’re not a regular X-Factor reader though, this is an easy recommendation. This storyline is about the various hell lords of the Marvel Universe fighting each other, what more could you ask for?

I am a relatively new comic book fan writing this blog for other new comic book fans and/or people who are interested in comics but don't know where to start. I've always been interested in writing, to the point where I have a college Creative Writing Certificate and I'm currently a year 2 Journalism student. I also have another blog where I mostly make fun of bad movies - www.healed1337.blogspot.com As for how I got into comics, I've always had a passing interest in superheroes: most notably Batman, Spider-man and the X-Men. Until February of 2011 (I think,) my only experience with any of these franchises came from the movies and video games. Shortly after I bought Marvel Vs. Capcom 3 however, I decided to check out X-23, Wolverine's female clone. I ended up reading her Innocence Lost origin story and enjoyed it. From there, I started reading various X-Men comics and it quickly exploded into my newest hobby. My other interests/hobbies include video games, movies, music, playing sports, my dogs and weird news.
View all posts by healed1337 →
This entry was posted in comic review and tagged comic review, comics, hell, hell on earth war, lorna dane, marvel comics, mephisto, multiple man, peter david, Polaris, satana, strong guy, x-factor, x-men. Bookmark the permalink.