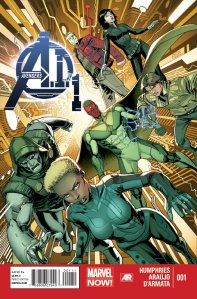 You could call this the first comic in Wave 2 of Marvel Now, especially since it released the same week the final issue of the first Marvel Now cancellation came out. Avengers AI is one result of Age of Ultron’s effect on the Marvel Universe. It’s an Avengers team made up entirely of AI units and experts; it’s an intriguing concept and it’s off to a decent start.

This issue sets up the premise very well and still has time for an entertaining fight scene. The dialogue between the three AI units during the fight scene remains amusing throughout, especially with the Doombot complaining about being forced to take orders from the Avengers. The other AI units are entertaining, as is Hank Pym and the new head of SHIELD’s AI unit, but Doombot really is the highlight.

This comic isn’t trying to be deep or morally relevant, nor is it trying to validate or condemn the existence of artificial intelligence. It’s just trying to be fun and it succeeds at that. The art is also fairly good. It’s a simple look that still has plenty of detail when it needs it. Some of the facial expressions look a bit goofy, but that may be intentional.

There isn’t much else to say about this comic without spoiling it. The story is fairly light, but that makes it easy to follow. It’s a little straight forward, but with all the epic storylines going on and books like Uncanny Avengers trying to be relevant at Marvel lately, it’s nice to have something simpler and completely inoffensive. If you’re looking for a simple yet fun Avengers comic, this is worth reading.

I am a relatively new comic book fan writing this blog for other new comic book fans and/or people who are interested in comics but don't know where to start. I've always been interested in writing, to the point where I have a college Creative Writing Certificate and I'm currently a year 2 Journalism student. I also have another blog where I mostly make fun of bad movies - www.healed1337.blogspot.com As for how I got into comics, I've always had a passing interest in superheroes: most notably Batman, Spider-man and the X-Men. Until February of 2011 (I think,) my only experience with any of these franchises came from the movies and video games. Shortly after I bought Marvel Vs. Capcom 3 however, I decided to check out X-23, Wolverine's female clone. I ended up reading her Innocence Lost origin story and enjoyed it. From there, I started reading various X-Men comics and it quickly exploded into my newest hobby. My other interests/hobbies include video games, movies, music, playing sports, my dogs and weird news.
View all posts by healed1337 →
This entry was posted in comic review and tagged age of ultron, avengers, avengers ai, comic review, comics, doombot, marvel comics, marvel now, sam harris, ultron, vision. Bookmark the permalink.