Usually I don’t get into TV shows. They take up way too much time, and I already have enough to read/watch/play. I rarely have the patience to watch more than one episode at once. Even when I do watch TV it’s usually a comedy of some sort, and almost always live action.

Just over a week ago I stumbled upon Avatar: The Last Airbender.  A friend of mine recommended it years ago, but as someone who has never really been into animated TV shows I waved it off. I never watched the movie, even though it released in the middle of my bad movie phase. I played the Xbox 360 game, but not much further than the easiest 1000 achievement points in existence. But several days after the Nostalgia Critic reviewed the movie, I decided to check this show out. Here are my thoughts. 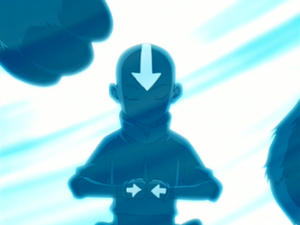 So I streamed the first few episodes online and thought that they were pretty good. The first episode was a fun introduction to the main characters, but it didn’t quite win me over. The second episode is meant to be watched right after the first, and it was also good. Aang’s quirky personality was genuinely funny. Sokka was delightful in his hopeless determination to defend his village. Katara hadn’t shown her true strength as a character yet, but she already displayed herself as the glue that held the gang together. Zuko and Iroh were also good as the villains, with Iroh’s advice being delightfully confusing.

I guess it was the third episode (the southern air temple) where the show really started to work for me. At that point, the show proved itself to be more than just another kids show. It proved itself to have genuine drama and character work. The moment where Aang first sees the remains of his former master was a very well done moment, and the subsequent speech Katara gave about how she and Sokka are his new family was pretty much perfect. It’s impressive how much they fit into a 23-minute episode without making it feel rushed.

I ended up buying all three seasons and powered through the series in 4 days, something I’ve never done with a TV show before. Even now, I’m re-watching it instead of popping in my unopened copy of Star Trek: Into Darkness (I still haven’t watched it yet, and I very much enjoyed the previous Star Trek movie). While not every episode in any TV show is going to be gold, even the unpopular episodes are at least a little entertaining. Almost every episode also has a point in the grand scheme of things, even if it’s just a touch of character development without advancing the main story. You can count the total number of filler episodes with one hand. 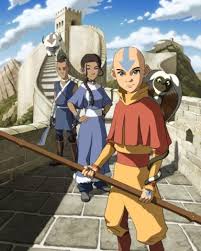 (the main gang, as of the first season)

Rather than going through the entire series as many have before, I’ll just briefly talk about the series and finish up with my favourite character in the series, Toph.

In the world of Avatar, there are four fundamental elements: water, earth, fire and air. There are four nations, each representing one of those elements. In those nations, there are people known as benders. Benders can telekinetically control their respective element and do all sorts of crazy things.  Each type of bending has its own philosophy behind it. Air is freedom, water is change, earth is stability and fire is energy. The whole show is a fascinating mix of eastern philosophy and western storytelling.

(Aang using all four elements in a relentless onslaught of attacks)

The Avatar is the continuous re-incarnation of one who can master all four elements, in addition to being the bridge between the physical and spiritual world. Aang is the current Avatar, and is faced with the responsibility of restoring balance to the world. The fire nation has pretty much taken over at this point. They’ve already wiped out the air nation (Aang being the last airbender on the planet) and are preparing to take over the earth nation. Over the course of the show, Aang must learn to master the other three elements, each having a dedicated season. Katara grows into a world class waterbender, Sokka becomes a formidable warrior without any bending abilities and Zuko goes through some major changes. It’s an epic storyline with an equally epic finale. 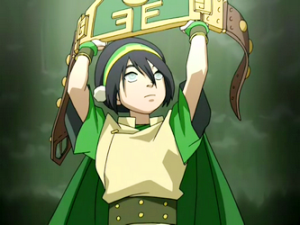 (Toph as the Blind Bandit)

And then there’s Toph. She’s introduced a few episodes into the second season as Aang’s eathbending master. By the end of the show, she proves herself to be among the best earthbenders in the entire world … and she happens to be blind. She’s a very unique take on a handicapped character though. In most fiction, handicapped characters are just that, handicapped. It’s nothing but a weakness to them, even if they find a way to live with it. Oracle in the pre-52 days is a decent exception to this as Barbara Gordon learns to be the ultimate behind the scenes crime fighter.

There’s also the other extreme, where handicaps don’t seem to affect the character at all. The most notable example I can think of is Daredevil, who has a hearing based radar vision. Because of this, you might as well say he can see better than most under normal circumstances. You might as well argue that his blindness is a non-factor. Sure, there are ways to affect his radar vision, but his overpowered radar is probably the main reason I can’t get into him as a character.

Toph lies somewhere in-between. Because she was born blind, her parents are very protective of her. They can’t help but see a helpless little girl, which only makes her brash and rebellious. But most importantly, it shapes the way she uses earthbending. While most simply move the earth, Toph sees through vibrations in the earth. It becomes the way in which she interacts with the world. Her unique connection to the earth greatly contributes to her absolute mastery of earthbending, and even leads to her invention of an advanced form of earthbending previously thought impossible (an absolutely glorious moment by the way). 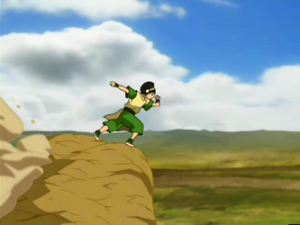 (As awesome as skating on rocks is, this isn’t the style she invents)

Despite this, her blindness is still a handicap. She is venerable to anything that isn’t touching the ground, such as Aang’s air-based attacks or anyone/anything coming at her from above. A lot of jokes are played at her expense because of this, not that Toph is above joking about it herself. The humour regarding Toph’s blindness is never disrespectful; it just makes her more entertaining.

Beyond her blindness, Toph is just a great character. She’s the total opposite of Katara in that she’s somewhat tomboyish, sarcastic and stubborn. Her strong will perfectly fits her role as the earthbender, and she’s probably the most rebellious member of the gang. Her confrontational nature clashes with Katara in a sense. Katara could be seen as the motherly figure of the gang, while Toph has problems with authority. While at first they don’t get along very well, Toph eventually learns that Katara actually cares about her instead of simply trying to protect her. 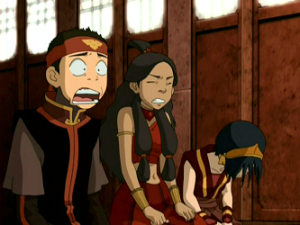 Pretty much all the characters in The Last Airbender are likable in their own way, but I think Toph is now my favourite TV character ever, animated or live action. Interestingly enough, they were originally going to make her a big, muscular man. As much as being a young girl makes her even more interesting, she’s tough enough that being a muscular man would still fit her perfectly.

Unless you’re someone who simply cannot get into an animated TV show, this is something you should definitely watch. It’s a kid-friendly show with adult-quality storytelling and morals. It’s a perfect balance between dark, serious character drama and fun. The animation quality is very good, even if the style is a bit weird at times. The running gags are genuinely funny. Out of all three seasons of the show, I can’t think of any complaints beyond the occasional nit-pick. The show is even better on a second viewing, and that’s saying a lot. Seriously if you haven’t already, watch this show.

Since embedding doesn’t seem to work, here’s a link to one of the better fight scenes in the show – there aren’t any spoilers in the clip.

As for the Legend of Korra (a sort-of sequel from some the same creators), it’s good, but not as good as Avatar. I may post about it someday. As someone who doesn’t have cable and doesn’t live in the United States though, it’s challenging to watch the second season so I have no thoughts on it yet.

I am a relatively new comic book fan writing this blog for other new comic book fans and/or people who are interested in comics but don't know where to start. I've always been interested in writing, to the point where I have a college Creative Writing Certificate and I'm currently a year 2 Journalism student. I also have another blog where I mostly make fun of bad movies - www.healed1337.blogspot.com As for how I got into comics, I've always had a passing interest in superheroes: most notably Batman, Spider-man and the X-Men. Until February of 2011 (I think,) my only experience with any of these franchises came from the movies and video games. Shortly after I bought Marvel Vs. Capcom 3 however, I decided to check out X-23, Wolverine's female clone. I ended up reading her Innocence Lost origin story and enjoyed it. From there, I started reading various X-Men comics and it quickly exploded into my newest hobby. My other interests/hobbies include video games, movies, music, playing sports, my dogs and weird news.
View all posts by healed1337 →
This entry was posted in tv show and tagged aang, airbending, animated, animated tv show, animation, avatar, avatar: the last airbender, cable tv, earthbending, family friendly, family show, firebending, iroh, katara, korra, nickelodeon, sokka, the last airbender, toph, tv show, waterbending. Bookmark the permalink.

1 Response to Avatar: The Last Airbender