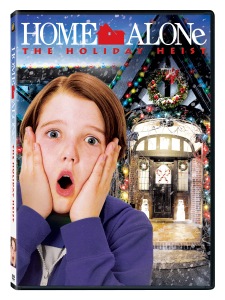 Home Alone is a holiday classic. Originally released in 1990, it starred Macaulay Culkin as Kevin, a kid who was accidentally left alone at home for Christmas. It made us all want to spend a week home alone and learn how to defend our homes with traps.

Critical reception was mixed, but it was massively popular and spawned many rip-offs and sequels. The second installment wasn’t as good, but it still holds nostalgic value to me. Home Alone 3 released into theatres in 1997, which was written and produced by John Hues, the creator of the franchise. It was very poorly received. As a kid I enjoyed it, but these days it’s forgettable at most. That and some of its traps are straight out of a horror movie.

Since then, two more Home Alone movies have released straight to TV. I’ve talked enough about 4, so let’s just say it’s abysmal. Last year saw the release of Home Alone: Holiday Heist on ABC, and the DVD released this past October. It’s a huge step up from the fourth installment, but it still pales in comparison to the original. 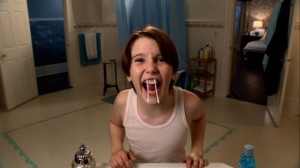 The most noteworthy cast member in Home Alone 4 was French Stewart, the weird guy from third rock from the sun. This movie happens to have Malcolm McDowell. Come on man, you were in Caligula. There’s no way you needed a paycheck this badly. Now to be fair, Malcom is the main reason this isn’t nearly as bad as Home Alone 4, but I’ll get to that later.

(Well, this is still more dignified than his role in Tank Girl)

As with Home Alone 3, this movie completely ignores the McCallister family in favour of a new group. Meet the Baxter family. You have Finn Baxter, the main character, and his older sister Alexis Baxter. They are addicted to electronics; Finn with his video games and Alexis with her phone. While I know several kids who are like this, these aren’t the best kinds of characters to focus your movie on. The parents are completely unremarkable, except that their acting is somehow worse than the kids. 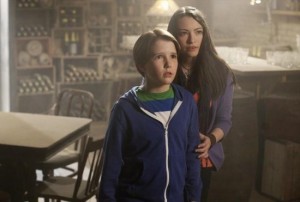 This family is annoying – very very annoying. Finn does little but talk about his video games and complains whenever he’s asked to do anything else. Alexis is the zombie teenager who barely responds to anything. The father is the over enthusiastic dude and the mother is extremely bipolar. As the movie goes on, the kids aren’t as bad, but the parents remain annoying until the very end.

The robbers are led by Sinclair, played by McDowell. The other two are Jessica and Hughes. Rather than being simple thieves, they’re art thieves specifically targeting a painting hidden within the Baxter’s new home. Sinclair’s character is just ok, but McDowell gives him a sense of energy. His performance is actually pretty good, and his obsession with the painting is easily the best part of this movie. Hughes is alright as the team’s safe cracker, even if he’s a bit of a Snoop Dog stereotype. Jessica on the other hand is annoying, as she’s constantly pining over the group’s previous safe cracker, to whom she had a relationship with. Many unfunny jokes result from that subplot.

This movie has way too many subplots. There’s the previously mentioned ex-safe cracker, the kids learning to live away from their electronics and the possible history Sinclair has with the painting. The worst subplot however is the ghost story. The house is supposedly haunted by the ghost of a moonshiner from decades past. Finn is frequently frightened by any noise, or anything he sees. Even some of the thieves are irrationally afraid of the ghost.

(There’s also this pretty much pointless character, an online gaming friend of Finn’s)

Whether or not this movie sticks to the “Home Alone” part is debatable. In all three of the theatrically released installments, the kid was home alone for the climax. In the fourth one, well … it should have been called Home with Two Completely Incompetent Adults. With this one, the parents have to go to a workplace party, and Alexis is charged with babysitting Finn while they’re gone. She ends up being accidentally locked up in a hidden vault, so Finn is kind of alone.

The most important question of them all; how are the traps? The first movie had simple traps that are relatively quick and easy to set up. The second movie took place in a home under heavy renovations, making its more elaborate traps believable even if some would have been lethal. The third movie had, well … there’s no way a kid would be able to figure all that out. The fourth movie didn’t really have traps. Home Alone 4 was dreadful.

This movie, well … some of the traps are decent enough. There are traps that simply pour thick, sticky liquids onto people’s hair. There the classic trap involving icy porches, and that one actually leads to an unexpected funny moment. Some of the traps are downright implausible, and others are a bit too elaborate for the little time Finn had to set them up. With everything being said, the traps are somewhere between Home Alone 2 and 3 in terms of entertainment value. This was a pleasant surprise.

This wasn’t nearly as bad as I thought it would be, thanks in part to a few decent traps and McDowell’s strong performance. It’s certainly not worth recommending to adults unless you’re very curious, but some kids may enjoy it. That said, it would be better to just show them the original and ignore any of its sequels and imitators.

Merry Christmas, or enjoy whatever holiday you’re celebrating this year.

I am a relatively new comic book fan writing this blog for other new comic book fans and/or people who are interested in comics but don't know where to start. I've always been interested in writing, to the point where I have a college Creative Writing Certificate and I'm currently a year 2 Journalism student. I also have another blog where I mostly make fun of bad movies - www.healed1337.blogspot.com As for how I got into comics, I've always had a passing interest in superheroes: most notably Batman, Spider-man and the X-Men. Until February of 2011 (I think,) my only experience with any of these franchises came from the movies and video games. Shortly after I bought Marvel Vs. Capcom 3 however, I decided to check out X-23, Wolverine's female clone. I ended up reading her Innocence Lost origin story and enjoyed it. From there, I started reading various X-Men comics and it quickly exploded into my newest hobby. My other interests/hobbies include video games, movies, music, playing sports, my dogs and weird news.
View all posts by healed1337 →
This entry was posted in movie review, movies and tagged abc, christmas movie, holiday movie, home alone, home alone 4, home alone: the holiday heist, malcom mcdowell, movie review, movies, tv movie. Bookmark the permalink.