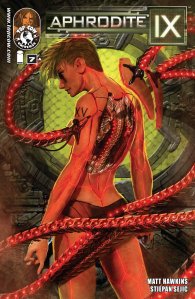 In the last issue of Aphrodite IX, the title character ran across a much newer model, Aphrodite XV. After an exhausting fight (for IX), the newer model invited her along to her base. That’s pretty much where this issue picks up.

Now that she has control of her mind, IX finally has a clear goal in mind – find her controller. XV tags along, even with the barrage of questions IX has. Meanwhile, the war between the cybernetically enhanced humans and the genetically enhanced (gens) is picking up. There’s some good character development with the king of the gens. There’s a great sense of mystery surrounding the post-apocalyptic world and what else remains in the shadows. There’s so much to like about this book’s world, and the execution is doing a good job at exploring it.

It’s also nice to see IX getting some actual character development. While her abilities were interesting enough in the first story arc, the way she was controlled and constantly had her own memory wiped almost made her more of a characacher than a character.

The art is also very good, although a slight step down from previous issues. There’s a lot of detail in both character designs and the backgrounds. The scene where the gens are attacking cyborgs is simply brilliant, as are the panels where IX is being scanned and you see her insides. While IX and XV both have green hair and a dot, they look distinct enough that you can always tell them apart – and that’s not even counting their different hair lengths. Some of the background colours blend together a little though, and they never did that in the first five issues.

I only tried the first issue because it was a Free Comic Book Day issue, yet this continually surprises me in how great it is. The story is intriguing, the post-apocalyptic war is actually kind of unique and the art is very good. This series is an easy recommendation for science fiction fans in general.

I am a relatively new comic book fan writing this blog for other new comic book fans and/or people who are interested in comics but don't know where to start. I've always been interested in writing, to the point where I have a college Creative Writing Certificate and I'm currently a year 2 Journalism student. I also have another blog where I mostly make fun of bad movies - www.healed1337.blogspot.com As for how I got into comics, I've always had a passing interest in superheroes: most notably Batman, Spider-man and the X-Men. Until February of 2011 (I think,) my only experience with any of these franchises came from the movies and video games. Shortly after I bought Marvel Vs. Capcom 3 however, I decided to check out X-23, Wolverine's female clone. I ended up reading her Innocence Lost origin story and enjoyed it. From there, I started reading various X-Men comics and it quickly exploded into my newest hobby. My other interests/hobbies include video games, movies, music, playing sports, my dogs and weird news.
View all posts by healed1337 →
This entry was posted in comic review, comics and tagged aphrodite ix, aphrodite xv, image comics, matt hawkins, science fiction, Stjepan Sejic, top cow productions. Bookmark the permalink.