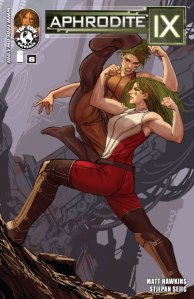 For a series I only tried because the first issue was a Free Comic Day special, this series has continued to impress me. The genetically enhanced (gens) are at war with the cybernetically enhanced in the distant, post-apocalyptic future. The title character has a bit of both, and was among the many cyborgs and androids put in stasis to await the end of the cataclysmic event and restore the human race.

This issue begins with Aphrodite IX and XV working together to infiltrate the main cyborg city, Speros City. Their scenes are just fun, watching them play around with the local authorities and both fooling and outfighting them with ease. There are several twists that you can kind of see coming, but that makes their infiltration all the more fun. Their playful banter and sarcastic comments only make it even more entertaining.

Meanwhile, there’s story development outside the main character’s scenes. The gens are preparing to retaliate the assassination of three of their leaders, while the cyborgs are activating more dangerous relics from the past. All the while Aphrodite’s narration is exploring the meaning behind hate, which feels perfectly appropriate. Not only is she learning how to feel since she disabled her contact with her handler, but racism a major theme in this series. There’s actually a lot of depth for a character that was originally introduced in the 90’s as a skimpily dressed cyborg killer with very little personality.

The art is very good as usual. There’s a near painted quality with the detailed character designs. There’s a lot of background detail, both in the Speros City streets and in the gen’s plotting scene. There’s great lighting and shadow work all over the place. The facial expressions are great as well. You can tell almost right away who is in disguise based on their smug grins alone. But perhaps the best art work is in the spread where they show the last remaining leader of the gens, along with the various background panels showing their small scale attacks as they prepare for their invasion. The last page with the cyborg skull looks straight out of a movie.

Often the best part of these comics is the science class after the main story, journaling Matt Hawkin’s research as he writes this title. This one is all about hate, looking at the strong emotion from both a scientific and a religious perspective. As for the comic itself, well … the characters are well written, the setting is fascinating and the story is starting to get exciting. While it takes place in a futuristic world, it still retains a realistic feel to it. There is so much to like about this series and its worth recommending to sci-fi fans in general.

I am a relatively new comic book fan writing this blog for other new comic book fans and/or people who are interested in comics but don't know where to start. I've always been interested in writing, to the point where I have a college Creative Writing Certificate and I'm currently a year 2 Journalism student. I also have another blog where I mostly make fun of bad movies - www.healed1337.blogspot.com As for how I got into comics, I've always had a passing interest in superheroes: most notably Batman, Spider-man and the X-Men. Until February of 2011 (I think,) my only experience with any of these franchises came from the movies and video games. Shortly after I bought Marvel Vs. Capcom 3 however, I decided to check out X-23, Wolverine's female clone. I ended up reading her Innocence Lost origin story and enjoyed it. From there, I started reading various X-Men comics and it quickly exploded into my newest hobby. My other interests/hobbies include video games, movies, music, playing sports, my dogs and weird news.
View all posts by healed1337 →
This entry was posted in comic review, comics and tagged androids, aphrodite ix, aphrodite xv, comic review, comics, cyborgs, genetically enhenced, hate, image comics, matt hawkins, post-apoctalyptic, science class, science fiction, Stjepan Sejic, top cow productions. Bookmark the permalink.