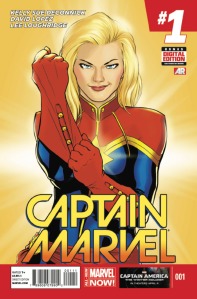 Captain Marvel is back with a new number 1, yet still written by Kelly Sue DeConnick. The first series was consistently brilliant with its strong characterization, great sense of humour and some of the best written dialogue in the industry. Unfortunately it never did too well with sales during its initial run, but thankfully many have since discovered the title and it continues to sell. This new volume has some serious shoes to fill.

The last volume ended with Carol sacrificing her memory to save New York. This issue takes place a few months later. She is now living in the Statue of Liberty with one of the best characters from the first volume, Kit. She’s actively working among the Avengers and has even developed a relationship with War Machine. She’s relatively happy thanks to all the support she has, yet she’s not sure where she belongs.

This issue is all about exploring her mindset while having a bit of fun. There are a couple action scenes, each exploring Carol’s heroic nature and how much she enjoys a good fight. The most entertaining is when she and Iron Man take on some common thugs. It’s such a non-issue for them that they continue discussing an alien they found as the thugs run away in terror. Each of Carol’s most important relationships are at least introduced, and in a way that’s easy for new readers to understand without wasting too much time for veterans. As always, DeConnick’s dialogue is nearly perfect. The issue starts with a flash forward to her adventures in space, which are entertaining yet don’t spoil anything. Throw in a cute “The origin of Captain Marvel by Kit” and you have a great first issue.

The art is also very good. It’s bright and colourful, and it’s a generally clean look. The nighttime New York scenes are brilliant with the glowing city lights in the backgrounds. Character expressions are also good. Carol in particular has an appropriately empty look through most of the comic, yet she’s not without her emotions of concern, joy, and being angry at Iron Man.

This issue isn’t quite as good as the bulk of DeConnick’s previous Captain Marvel volume, but it’s a great start. It’s a shame that we’ll be losing her supporting cast for a while, but that also means we’ll be getting a new supporting cast that, as far as we know, may be just as fun. If you like Carol Danvers, enjoyed the previous volume, or are interested in the character who deserves to be Marvel’s most iconic super heroine, you’d be a fool not to give this a chance.

I am a relatively new comic book fan writing this blog for other new comic book fans and/or people who are interested in comics but don't know where to start. I've always been interested in writing, to the point where I have a college Creative Writing Certificate and I'm currently a year 2 Journalism student. I also have another blog where I mostly make fun of bad movies - www.healed1337.blogspot.com As for how I got into comics, I've always had a passing interest in superheroes: most notably Batman, Spider-man and the X-Men. Until February of 2011 (I think,) my only experience with any of these franchises came from the movies and video games. Shortly after I bought Marvel Vs. Capcom 3 however, I decided to check out X-23, Wolverine's female clone. I ended up reading her Innocence Lost origin story and enjoyed it. From there, I started reading various X-Men comics and it quickly exploded into my newest hobby. My other interests/hobbies include video games, movies, music, playing sports, my dogs and weird news.
View all posts by healed1337 →
This entry was posted in comic review, comics and tagged all new marvel now, captain marvel, carol danvers, comic review, comics, iron man, kelly sue deconnick, marvel comics, miss marvel, ms. marvel, war machine. Bookmark the permalink.