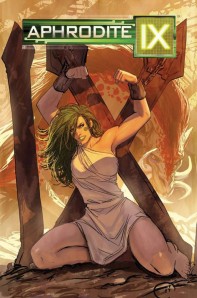 It’s sad that after this, Aphrodite IX only has two issues left. Even though Matt Hawkins and Stjepan Sejic have plans for an Aphrodite/Cyber Force series in the future, it hasn’t been announced yet. This series has been consistently good from the start, and if this issue is any indication, the last two will be intense.

The war between the Cyborgs and the Gens (genetically enhanced humans) may be coming to a close. Aphrodite IX and XV have infiltrated Speros City, the capital of the cyborgs, while the Gens are ready to attack en mass. It’s quite the role reversal from the title’s start, when the Cyborgs were preparing to wipe out the Gen capital. Meanwhile, the other cyborgs from Aphrodite’s creators are all awakening, preparing their own global takeover. Hades IX in particular is working to bring everyone together. There is so much going on in this issue, yet it does a decent job at explaining everything.

The tension really ramps up by comic’s end. Without spoiling anything, let’s just say that so many things could go wrong for the title character in issue 10. There are several “oh crap” moments. If you’ve been enjoying this title so far, it’s hard not to get excited for issue 10.

The art is also very good. As the two Aphrodite models are walking through Speros city, there is a lot of environmental detail whether in the streets or standing by a window. The character is impressive, both with their facial expressions and their hair as it moves during their fight scene. The best page for the art may be the spread showing the Gens preparing for war, with all their dragon-like creatures lined up on a Cliffside, along with the most realistic looking facial hair I’ve ever seen in a comic.

For those who haven’t been reading this title, here’s the gist. Aphrodite IX is a cyborg/genetically enhanced hybrid infiltration specialist. Her controller can temporarily assume direct control, and then she’ll wake up with no memory of what she just did. The series began with her awaking in a stasis pod, in a post-apocalyptic future where the few remaining humans were either cyborgs or genetically enhanced, and the two sub races have been at war for centuries. It’s such an interesting world and is well worth the read, but it’s probably better to start from the beginning. The first issue was a free comic day issue and can still be downloaded for free here.

As for today’s issue, it’s an easy recommendation. While there isn’t a lot of character development, it’s fun, intense and carries a lot of big story reveals.

I am a relatively new comic book fan writing this blog for other new comic book fans and/or people who are interested in comics but don't know where to start. I've always been interested in writing, to the point where I have a college Creative Writing Certificate and I'm currently a year 2 Journalism student. I also have another blog where I mostly make fun of bad movies - www.healed1337.blogspot.com As for how I got into comics, I've always had a passing interest in superheroes: most notably Batman, Spider-man and the X-Men. Until February of 2011 (I think,) my only experience with any of these franchises came from the movies and video games. Shortly after I bought Marvel Vs. Capcom 3 however, I decided to check out X-23, Wolverine's female clone. I ended up reading her Innocence Lost origin story and enjoyed it. From there, I started reading various X-Men comics and it quickly exploded into my newest hobby. My other interests/hobbies include video games, movies, music, playing sports, my dogs and weird news.
View all posts by healed1337 →
This entry was posted in comic review, comics and tagged aphrodite ix, aphrodite xv, comic review, comics, cyborgs, genetically enhenced, hades ix, image comics, matt hawkins, science fiction, science fiction comics, speros city, Stjepan Sejic, top cow productions. Bookmark the permalink.