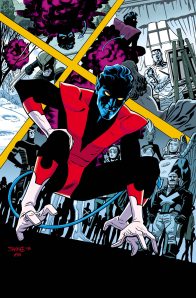 It’s been  years since Chris Claremont has written an X-Men ongoing title. In fact, it’s been a while since he’s written comics in general, having focused on prose lately. This marks his return to the franchise he built into a rich universe, creating so many characters that are still popular today. And while Claremont didn’t create Nightcrawler, it feels right that he’s writing this solo title.

Nightcrawler 1 opens up with a classic Claremont trope – Nightcrawler and Wolverine sparring in the danger room. It’s a fun scene that shows both characters’ fighting prowess, while tapping into today’s continuity a bit. Afterward, Nightcrawler wanders the school, reminiscing on how much things have changed and how he no longer has the strangest appearance among the X-Men. It’s nice to see several cameos from underutilized characters such as Mercury and Rachel Grey Summers.

The second half of the comic has Kurt reuniting with a love interest (who I know little about). Their meeting is interrupted by this issue’s fight scene, introducing the first storyline for the title. The action is fun, and throws in Nightcrawler’s bamfs for extra measure. Including the bamfs could make this title more interesting. The dialogue is well-written and the characterization is solid. Nightcrawler’s internal narration does tend to get a bit wordy, and while long-time Claremont readers will be used to that, it might turn-off new comic readers.

There isn’t too much to say about the art. It’s solid and carries a classic feel to it. Also, the bamfs look kind of adorable at times.

It’s hard to gage this series’ quality with this issue alone, but it’s a good first entry. If you’re a fan of either Chris Claremont or Nightcrawler, this is worth checking out. It’s not as good as Claremont’s legendary Uncanny X-Men run, but I’m not sure anyone will ever top that.

I am a relatively new comic book fan writing this blog for other new comic book fans and/or people who are interested in comics but don't know where to start. I've always been interested in writing, to the point where I have a college Creative Writing Certificate and I'm currently a year 2 Journalism student. I also have another blog where I mostly make fun of bad movies - www.healed1337.blogspot.com As for how I got into comics, I've always had a passing interest in superheroes: most notably Batman, Spider-man and the X-Men. Until February of 2011 (I think,) my only experience with any of these franchises came from the movies and video games. Shortly after I bought Marvel Vs. Capcom 3 however, I decided to check out X-23, Wolverine's female clone. I ended up reading her Innocence Lost origin story and enjoyed it. From there, I started reading various X-Men comics and it quickly exploded into my newest hobby. My other interests/hobbies include video games, movies, music, playing sports, my dogs and weird news.
View all posts by healed1337 →
This entry was posted in comic review, comics and tagged all new marvel now, bamfs, chris claremont, comic review, comics, marvel comics, mercury, nightcrawler, rachel grey summers, todd nauck, wolverine, x-men. Bookmark the permalink.