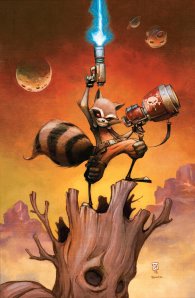 Scottie Young is a bit of a unique figure in the comic industry. He’s almost more of a cartoonist, and he one can both write and draw well. He’s well-known for his “baby” comics, which are always delightful to read. A-Babies vs. X-Babies is particularly entertaining on that front, and anyone who read the main Avengers vs. X-Men event must hunt it down and read it. He has a delightful sense of humour in both is writing and his cartoonish art. He’s also done a variant cover for almost every Marvel Now #1. Now he’s been given an ongoing title about Rocket Raccoon, and when my local shop was short on the one title I planned to pick up, I bought this instead. I’m so glad that I did.

Rocket Raccoon 1 is the most enjoyable comic of the week. It kicks off with Rocket sneaking up to two guards discussing some show about a living planet. The scene perfectly sets the mood for the title, which is mostly a mix of humour and a slice of adventure. This is best described as a comedy adventure and not an adventure comedy, yet the plot is still interesting.

The art is very charming. It’s a mostly cartoonish look, which perfectly matches the comedic tone. It contradicts Rocket’s thuggish attitude, but the contradiction actually works in the comic’s favour. There are all sorts of visual gags thrown in, so much so that it’s hard to pick one to describe. And for a cartoon-style look, there’s a lot of detail in the environments.

This review is short, not because it’s a hard book to talk about, but because I don’t want to spoil it. As an apology, please enjoy the variant cover below. There’s just so much to enjoy in Rocket Raccoon 1. If you like comics or are interested in the Guardians of the Galaxy, make sure to at least read this comic.

I am a relatively new comic book fan writing this blog for other new comic book fans and/or people who are interested in comics but don't know where to start. I've always been interested in writing, to the point where I have a college Creative Writing Certificate and I'm currently a year 2 Journalism student. I also have another blog where I mostly make fun of bad movies - www.healed1337.blogspot.com As for how I got into comics, I've always had a passing interest in superheroes: most notably Batman, Spider-man and the X-Men. Until February of 2011 (I think,) my only experience with any of these franchises came from the movies and video games. Shortly after I bought Marvel Vs. Capcom 3 however, I decided to check out X-23, Wolverine's female clone. I ended up reading her Innocence Lost origin story and enjoyed it. From there, I started reading various X-Men comics and it quickly exploded into my newest hobby. My other interests/hobbies include video games, movies, music, playing sports, my dogs and weird news.
View all posts by healed1337 →
This entry was posted in comic review, comics and tagged all new marvel now, comic review, comics, guardians of the galaxy, marvel comics, rocket raccoon, scottie young. Bookmark the permalink.