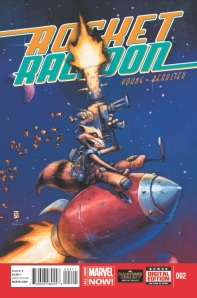 For a moment I thought of quoting one of Rocket Raccoon’s lines in this comic to begin the review, but there are so many great lines it’s hard to choose one that works best out of context. That’s how good this comedic title by Scottie Young is.

The first issue introduced several story arcs. Someone is framing Rocket Raccoon for murder, while a league of his ex-girlfriends (or those who thought they were his girlfriends) want to kill him. Issue 1 ended with Rocket surrendering to the police, which is where this one picks up. This issue kicks off right away with a humerous interrogation scene. Afterward, Rocket is sent to the highest security prison in the galaxy by his own request. Why? So that we can have the most entertaining two-page spread I’ve seen period.

It’s hard to review this kind of comic without spoiling the fun. Every single page has at least one funny joke or a very creative moment in storytelling. The humour ranges from clever references to making fun of bad continuity all the way to a bit of dark humour. The jokes are told both through the writing and through the art, also done by Scottie Young.

Young’s charming art style fits the comic’s mood perfectly. Even the dangerous, high security prison has a comedic feel to it. There are plenty of aliens in the prison with unique appearances. Most details in the environment don’t just add life to the comic, they add to the fun. For example, there’s a wet floor sign in the floor of the prison, with a skeleton beside it. Nobody seems particularly bothered by the skeleton or the rats picking away at the corpse’s remains. That right there tells you everything you need to know about the prison. This comic is filled with those kinds of details.

If you need a good laugh, pick this up. If you enjoyed Rocket Raccoon in the Guardians of the Galaxy movie, pick this up. It’s almost worth saying that if you’re the slightest bit interested in comics and have a sense of humour in general, you should pick this up. With some of the more mediocre comics I’ve read this week and the two titles I’ve decided to drop, Rocket Raccoon 2 acts as a great reminder of why I enjoy the medium so much. It’s not quite my favourite comic of the week (that would be She Hulk 7), but it’s a very close second.

I am a relatively new comic book fan writing this blog for other new comic book fans and/or people who are interested in comics but don't know where to start. I've always been interested in writing, to the point where I have a college Creative Writing Certificate and I'm currently a year 2 Journalism student. I also have another blog where I mostly make fun of bad movies - www.healed1337.blogspot.com As for how I got into comics, I've always had a passing interest in superheroes: most notably Batman, Spider-man and the X-Men. Until February of 2011 (I think,) my only experience with any of these franchises came from the movies and video games. Shortly after I bought Marvel Vs. Capcom 3 however, I decided to check out X-23, Wolverine's female clone. I ended up reading her Innocence Lost origin story and enjoyed it. From there, I started reading various X-Men comics and it quickly exploded into my newest hobby. My other interests/hobbies include video games, movies, music, playing sports, my dogs and weird news.
View all posts by healed1337 →
This entry was posted in comic review, comics and tagged all new marvel now, comic review, comics, guardians of the galaxy, marvel comics, rocket raccoon, scottie young. Bookmark the permalink.