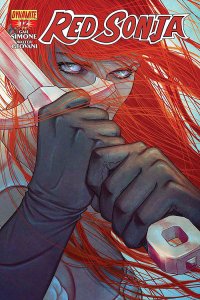 In issue 7, a dying king sent Red Sonja on a quest to retrieve the land’s 6 greatest artisans in their chosen fields. She acquired the greatest chef, the greatest beast trainer, the “princess of pillowing”, the greatest swordsman, an astronomer and in this issue, the lands’ greatest dancer. As someone who has grown to dislike kings, she only does this because he agreed to free all his slaves in exchange for the artisans. But he might not intend to honor that agreement.

This issue starts off with a humorous “rescuing” of the land’s greatest dancer and then proceeds straight to the king’s last party. After a long quest challenged with bloodshed, constant annoyances and building body odor, she’s finally treated to pampering, a bath and a very nice dress that still suits her violent personality. After she learns of the king’s betrayal however, she is soon imprisoned and finds herself useless to stop the king from burying all his slaves with him. That’s when the artisans join the struggle, each helping to defeat the king in their own way. It’s a brilliant conclusion to such a storyline, showing that a world class prostitute, a master cook and a young beast trainer can all be useful in bringing down a powerful ruler in their own ways. Despite everything that happens in this issue, it remains easy to follow and still has room for a few sentimental moments between Sonja and a few of the artisans.

The art by Walter Geovani is great. He does a great job at capturing Sonja’s fury in both her facial expressions and body positions. The party is complete with tables full of food and attendants, both rich and servants, with a good variety of outfits among them. The action flows well too.

My favourite comic of the week is between this and Cyclops 5. If you would have asked me before this run began, I would have said I’d never become a fan of Red Sonja. Gail Simone’s writing has proven me wrong. While this storyline isn’t as good as the first, it remained consistently enjoyable and managed to find room for sentimental moments and some character development. If you’re into barbarian stories, this series is an easy recommendation.

I am a relatively new comic book fan writing this blog for other new comic book fans and/or people who are interested in comics but don't know where to start. I've always been interested in writing, to the point where I have a college Creative Writing Certificate and I'm currently a year 2 Journalism student. I also have another blog where I mostly make fun of bad movies - www.healed1337.blogspot.com As for how I got into comics, I've always had a passing interest in superheroes: most notably Batman, Spider-man and the X-Men. Until February of 2011 (I think,) my only experience with any of these franchises came from the movies and video games. Shortly after I bought Marvel Vs. Capcom 3 however, I decided to check out X-23, Wolverine's female clone. I ended up reading her Innocence Lost origin story and enjoyed it. From there, I started reading various X-Men comics and it quickly exploded into my newest hobby. My other interests/hobbies include video games, movies, music, playing sports, my dogs and weird news.
View all posts by healed1337 →
This entry was posted in comic review, comics and tagged barbarian stories, comic review, comics, dynamite comics, gail simone, red sonja, slavery, walter geovani. Bookmark the permalink.