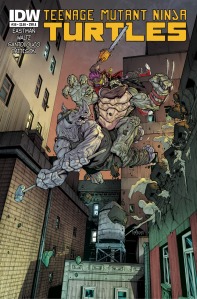 There are several major plotlines going on in the current Ninja Turtles series. There’s the foot clan, which has pretty much taken over the city. There’s Hob, creating an army of animal based mutants in preparation for his war on humanity. There’s also Krang, a general from another dimension who is planning to invade Earth. It can be difficult to juggle so many plotlines at once, yet the TMNT writing team of Kevin Eastman, Tom Waltz and Bobby Curnow manage quite well.

Teenage Mutant Ninja Turtles 39 starts where the last issue left off, with Pete, Hob’s dim-witted mutant bird, invites Bebop and Rocksteady into their army. Looking for a rematch with the Ninja Turtles, they decide it’s worth meeting up. The first few pages manage to explain all this, while also showing their thuggish ways humorously. Besides the promised fight, this issue touches on all of the major plotlines in a way that explains everything a new reader would need to know, yet without being patronizing to regulars.

The comic finds a good balance between the darker elements of the story and humour for a read that’s well varied in tone while still remaining coherent. It’s a much lighter arc than city fall was. The only real downside is that when the fight commences, it switches so fast between characters that there’s no real sense of progression. On one panel you see Rocksteady and slash fighting, and the next Bebop is tanking bullets. It’s a fun scene, but it would have benefitted from better focus.

The arty by Mateus Santolouco is great. There’s plenty of background detail as Bebop and Rocksteady wander on the streets, with the nighttime city lights and a bum under a blanket to the side. Even the outside walls have scattered posters of varied sizes and colours. Pete looks kind of adorable with both his orange eyes and his dorky smile. While the fight is hard to follow because it jumps around, the individual panels do a good job at showcasing how chaotic it is and the ferocity behind the two villains.

This isn’t the greatest issue of Teenage Mutant Ninja Turtles, but when the series is as great as it is, that’s not much of a detriment. All the characters are likeable, and the current conflict between Donatello and Splinter make for good storytelling when it’s usually Raphael who would wander off. If you’re a Ninja Turtles fan who hasn’t checked this series out yet, you most certainly should whether you’re into comics or not. Anyone who knows a TMNT fan who doesn’t read comics, spread the word.

I am a relatively new comic book fan writing this blog for other new comic book fans and/or people who are interested in comics but don't know where to start. I've always been interested in writing, to the point where I have a college Creative Writing Certificate and I'm currently a year 2 Journalism student. I also have another blog where I mostly make fun of bad movies - www.healed1337.blogspot.com As for how I got into comics, I've always had a passing interest in superheroes: most notably Batman, Spider-man and the X-Men. Until February of 2011 (I think,) my only experience with any of these franchises came from the movies and video games. Shortly after I bought Marvel Vs. Capcom 3 however, I decided to check out X-23, Wolverine's female clone. I ended up reading her Innocence Lost origin story and enjoyed it. From there, I started reading various X-Men comics and it quickly exploded into my newest hobby. My other interests/hobbies include video games, movies, music, playing sports, my dogs and weird news.
View all posts by healed1337 →
This entry was posted in comic review, comics and tagged bebop and rocksteady, bobby curnow, comic review, comics, foot clan, general krang, hob, idw comics, kevin eastman, krang, mateus santolouco, mutants, ninja turtles, shredder, teenage mutant ninja turtles, tmnt, tom waltz. Bookmark the permalink.