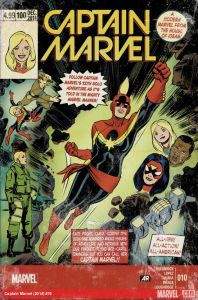 I haven’t read too much of her solo work, outside of Kelly Sue DeConnick’s two volumes and two paperbacks from Brian Reed’s run, but in the last few years I’ve become a bit of a fan. She’s easily among the more powerful members of the Avengers and has ideals similar to Captain America. Sure, she’s more of a hothead and is more willing to bend the rules, but she is the very definition of a superhero. If 2018’s movie does her any justice, it will be an amazing movie.

Most 100th issues aim for something conventional, be it a giant fight scene, the beginning or end of a major storyline or some sort of look back on the character. This one takes a bit of a different route, yet it’s just as effective. With Carol in space for this entire volume so far, this one looks back on Earth to her closest friends and those she’s influenced the most. It’s a look at her legacy through other character’s eyes, narrated in the form of a letter. Carol herself bookends the issue, before and after she reads the letters.

Not only is this an effective way to explore Captain Marvel, but it’s a fun story. A criminal has escaped from prison and is controlling an army of rats using science. The situation leads to a number of amusing moments, most notably with Spider Woman’s apparent fear of rats. Kit (a kid who looks up to Carol) shows a bit of a heroic side and helps save some of her friends. War machine later shows up and does his own part in containing the situation. The letter is written by these three and a nurse looking after Carol’s bed-ridden elderly friend, each offering a unique perspective on the situation and unique yet effective words of encouragement.

The art is handled by David Lopez, Marcio Takara and Laura Braga, each covering a different portion of the story, and all of it is good. At first glance, it’s actually difficult to tell Lopez and Braga’s sections apart. Lopez outlines the issue, drawing Carol’s scenes in space and Kit’s scene. He makes good use of environmental details and in the panels filled with rats, they all have various poses that make sense for the situation. Takara handles Spider Woman’s pages, and while it’s a simpler look, it utilizes facial expressions to perfectly capture Spider Woman’s fear and hesitation. All three artists draw facial expressions well, but Takara stands out on this department. Braga draws War Machine’s portion, and it’s the most detailed art in the comic. War machine’s suit is complete with all the armor plates, lines and paint. Even the kitchen in Carol’s old apartment has several types of walls; notice the tile wall above the counter. The villain has longer hair on these pages than the others, but that’s a minor issue and they’re different locations and times altogether.

This is a great comic, and an effective way to celebrate Carol Danvers as a character. If you read Marvel comics in general you should check this series out, and what’s a better place to start than an anniversary issue that stands perfectly on its own.

I am a relatively new comic book fan writing this blog for other new comic book fans and/or people who are interested in comics but don't know where to start. I've always been interested in writing, to the point where I have a college Creative Writing Certificate and I'm currently a year 2 Journalism student. I also have another blog where I mostly make fun of bad movies - www.healed1337.blogspot.com As for how I got into comics, I've always had a passing interest in superheroes: most notably Batman, Spider-man and the X-Men. Until February of 2011 (I think,) my only experience with any of these franchises came from the movies and video games. Shortly after I bought Marvel Vs. Capcom 3 however, I decided to check out X-23, Wolverine's female clone. I ended up reading her Innocence Lost origin story and enjoyed it. From there, I started reading various X-Men comics and it quickly exploded into my newest hobby. My other interests/hobbies include video games, movies, music, playing sports, my dogs and weird news.
View all posts by healed1337 →
This entry was posted in comic review, comics and tagged all new marvel now, anniversary issue, carol corps, carol danvers, comic review, comics, david lopez, kelly sue deconnick, laura braga, marcio takara, marvel comics, ms. marvel, spider woman, war machine. Bookmark the permalink.