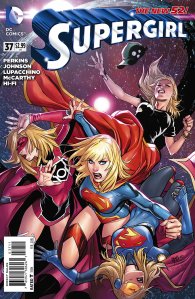 New 52 Supergirl started off with Mike Johnson as the writer (along with Michael Green), but he left around issue 19 or so. After being handed around to a couple different writers, Supergirl is now back in Mike Johnson’s hand, along with co-writer Kate Perkins. Since I couldn’t write a review for issue 36 due to November being such a busy month, I figured it’s only fair I give this one a review.

In the last issue, Supergirl found herself teleported to the Crucible Academy, an intergalactic school for superheroes the same way Hogwarts is a school for Wizards and Witches. This issue shows Supergirl settling into the school and also introduces her class teammates. The supporting cast is interesting and well-varied, showing some emotional depth half-way through for several of them. The school also seems to be good for Supergirl, moving her forward as a character instead of backwards like much of Tony Bedard’s mediocre run. The school reminds her of home (Krypton) in the best and worst ways which are already making this story arc dramatically interesting.

This comic gets a lot done in a relatively short amount of time. It not only introduces the supporting cast, but finds time for several action scenes that are each fun in their own way, and suggesting that at least one staff member at the academy have … questionable motivations. The cliffhanger ending takes place on another planet (the home planet of one of Supergirl’s teammates), which is in the middle of a civil war. Without spoiling the ending, it’s emotionally intense for both Supergirl and her teammate, while also promising a good fight scene in the next issue. Despite all this, the issue flows smoothly.

The art by Emanuela Lupacchino is great. It’s a fairly clean look, yet there’s plenty of detail and bright colours to make it appealing to the eye. The splash page near the opening offers a wide-view of a larger room at the academy, complete with windows in the background, some sort of glowing pool-like structure in the middle and various students hanging around with well-varied appearances. The supporting cast is just as varied in appearance as they are in personality. The different lecture halls and sparring rooms offer different science-fiction style visuals. Pretty much everything about the art works.

Supergirl’s solo series is back on track. Not only does it further Kara’s development after months of slagging under various creators, but it introduces a new corner of the DC Universe ripe for exploration. While they’re both great superheroes, in many ways Supergirl is a more interesting character than Superman. She’s younger, which gives her much more room for character development and maturing, not to mention she’s a bit more of a hothead. If you’ve never checked her out, Supergirl 36 and 37 is the perfect place to check her out. It’s a new story-arc and direction that’s easy to follow, and they’re so well-written.

I am a relatively new comic book fan writing this blog for other new comic book fans and/or people who are interested in comics but don't know where to start. I've always been interested in writing, to the point where I have a college Creative Writing Certificate and I'm currently a year 2 Journalism student. I also have another blog where I mostly make fun of bad movies - www.healed1337.blogspot.com As for how I got into comics, I've always had a passing interest in superheroes: most notably Batman, Spider-man and the X-Men. Until February of 2011 (I think,) my only experience with any of these franchises came from the movies and video games. Shortly after I bought Marvel Vs. Capcom 3 however, I decided to check out X-23, Wolverine's female clone. I ended up reading her Innocence Lost origin story and enjoyed it. From there, I started reading various X-Men comics and it quickly exploded into my newest hobby. My other interests/hobbies include video games, movies, music, playing sports, my dogs and weird news.
View all posts by healed1337 →
This entry was posted in comic review, comics and tagged comic review, comics, crucible academy, dc comics, emanuela lupacchino, kara zor-l, kate perkins, mike johnson, new 52, supergirl. Bookmark the permalink.