Novel Reading – Harry Potter and the Prisoner of Azkaban 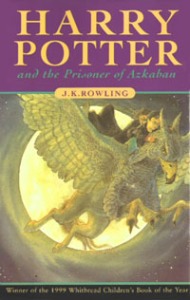 My goal for this year (starting this month) is to read at least 2 books every month I’m not writing, and to read at least one comic storyline or paperback in addition to my usual comic reviews. What I mean by not writing is that I often write for a month and then take a month off to refresh my mind and let ideas flow, and I have yet to not complete at least one book every writing month. For the second book I’m reading this month, I finally read Harry Potter and the Prisoner of Azkaban for the first time. There’s no point in officially making this a review because of how well-known this series is, so here are my thoughts, as both a reader and a writer.

I never really read the Harry Potter books as they came out, and I only got into the movies shortly before Deathly Hallows part 1 released. In September I finally read the first two books, and enjoyed both of them quite a bit. The first two movies aren’t anything particularly special when compared to the books; in fact there are many aspects of the first two movies that could be considered mediocre. The third movie on the other hand is fantastic (save for the bad werewolf CGI). It’s probably my second favourite of the movie series, so I was really looking forward to this book.

This doesn’t surprise me that much, but book 3 is where the series really starts separating itself from the movies, with a lot of extra information, the mythology behind the various classes Harry and his friends are taking and additional plot details to increase tension and depth. The movie only had one Quidditch match while the book actually has three on page. Each match has a different feel, with the last one for the Quidditch championship being particularly fun. The mystery behind Sirius Black is explored in much greater detail, including his escape from Azkaban and the distrust between him, Professor Lupin and Snape. While the first two movies give you all the most important details from the first two books, you’re missing out on a lot of detail if you’ve only seen the third movie and never read the book. Even the ending is quite a bit different.

The writing is also stronger this time round. The first book was well-written to begin with, but J.K. Rowling’s writing obviously improves further with every entry so far. This book has a lot more foreshadowing than the first two, and there’s a good variety of subtle and blatant foreshadowing that keeps the mystery alive while also ramping up the tension. The pacing is better, and the exposition is used more sparingly and is spread evenly through the book. The witty humour balances out this books darker mood when compared to the first two, keeping it fun for any age group that could see themselves enjoying a story about a wizardry school.

Like I said in the first two posts I’ve done for the Harry Potter books, I doubt J.K. Rowling’s writing will influence my own. While I generally write in third-person, I use a lot more direct internal thoughts than she seems to, and I’m usually a bit more direct with perspective (not to mention each book in my series has at least three perspective characters so far). It’s obvious that she plans ahead in her series, but that’s also something I’m already doing with my own. The second book I wrote for Nanowrimo this year has the most ominous ending I could possibly think of, leading straight into the next book I’ll be writing.

It’s debatable which of the first two Harry Potter movies are better, but the second book is blatantly better than the first. The third movie is among the best of the Harry Potter films and yet the book blows it out of the water. I’m looking forward to the next Harry Potter book, but I’m also kind of dreading it. Not because I doubt it will be good, but because it will be the longest book I’ve ever read (when I get to it). The second longest I read was Dracula by Bram Stoker, and while that was the first novel I read in several years, it took me most of that month to get through it.

In the meantime, part of this year’s goal is to keep a cycle of 2 novels and then 1 non-fiction book. Depending on each non-fiction book, I might not make a blog post about it. If it’s a book about writing than I most likely will, but this month’s is probably going to be on the First World War since the first book in my series takes place in 1916 Europe. After that, my next fiction book will be Magic Slays (Kate Daniels 5), and the book after that will probably be a little … experimental. After that, it will either be a vampire book of some kind, a superhero book or one of the Star Wars X-Wing books that I haven’t read since high school. Either way, I’ll be reading at least three other books before I touch Harry Potter and the Goblet of Fire, because I like my 4-book cycle so far.

I am a relatively new comic book fan writing this blog for other new comic book fans and/or people who are interested in comics but don't know where to start. I've always been interested in writing, to the point where I have a college Creative Writing Certificate and I'm currently a year 2 Journalism student. I also have another blog where I mostly make fun of bad movies - www.healed1337.blogspot.com As for how I got into comics, I've always had a passing interest in superheroes: most notably Batman, Spider-man and the X-Men. Until February of 2011 (I think,) my only experience with any of these franchises came from the movies and video games. Shortly after I bought Marvel Vs. Capcom 3 however, I decided to check out X-23, Wolverine's female clone. I ended up reading her Innocence Lost origin story and enjoyed it. From there, I started reading various X-Men comics and it quickly exploded into my newest hobby. My other interests/hobbies include video games, movies, music, playing sports, my dogs and weird news.
View all posts by healed1337 →
This entry was posted in fantasy., novels, writing and tagged azkaban, fantasy novel, harry potter, harry potter and the prisoner of azkaban, j.k. rowling, novel, novel reading, novel review, novels, sirius black. Bookmark the permalink.