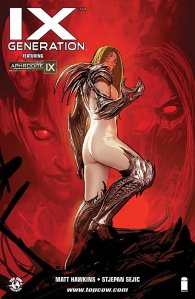 One series I very much enjoyed from last year and somehow forgot about in my “favourite comics of 2014” post was Matt Hawking’s Aphrodite IX, which sadly ended with issue 11 in June. The series took place in a post-apocalyptic future where two offshoots of the human race, the gens and the cyborgs, were at war with each other. The series ended with a bunch of Generation IX’s from the Aphrodite Protocol (each named after a Greek god) awakening and taking over Speros, the central city to the Cyborgs. With each of the IX ruling over a section of the city and proclaiming themselves as gods, they pretty much rule the world.

IXth Generation 1 takes place 25 years after Aphrodite IX ended, with the different leaders infighting and Aphrodite doing her best to remain neutral. Things get out of hand when the Darkness unleashes itself on both Aphrodite IX and Hephaestus IX when they try to awake Velocity (the all-mother of sorts). It makes for a fascinating combination of the brilliant science fiction world of Aphrodite IX and Top Cow’s own artifact mythology. If this goes where I think it’s going, with the IXth Generation leaders each taking an artifact, this series will be amazing.

Even though this comic is awesome, it might be hard to follow for those who aren’t familiar with the Top Cow universe. It explains the basics of what you need to know without slowing down the story and you won’t be confused, but without a deeper knowledge, you won’t fully grasp the sheer scale of this comic’s events.

Stjepan Sejic’s art is nothing short of fantastic. The opening pages demonstrate the breathtaking Speros City, damaged by years of constant war between factions and the brutality of the less moral IX rulers. The environmental detail continues when Aphrodite and Hephaestus fly to the moon to awake Velocity, with a base complete with a large observation dome to look upon the stars and fancy sci-fi lighting. His grasp of facial expressions perfectly captures a variety of moods and reactions. The impressive detail on both the Darkness and the Witchblade is the real highlight, along with all the green goo covering Aphrodite and Hephaestus after the fight. How Sejic manages this series, Death Vigil and his Deviantart webcomics at the same time is beyond me.

This is my favourite comic of the week. It combines science fiction, mythology, good action and wonderful art to form a complete package. Although you won’t appreciate this comic the same way unless you’re familiar with Top Cow’s Universe, it’s still worth checking out if a dystopian future mixed with ancient artifacts of power sounds interesting.

I am a relatively new comic book fan writing this blog for other new comic book fans and/or people who are interested in comics but don't know where to start. I've always been interested in writing, to the point where I have a college Creative Writing Certificate and I'm currently a year 2 Journalism student. I also have another blog where I mostly make fun of bad movies - www.healed1337.blogspot.com As for how I got into comics, I've always had a passing interest in superheroes: most notably Batman, Spider-man and the X-Men. Until February of 2011 (I think,) my only experience with any of these franchises came from the movies and video games. Shortly after I bought Marvel Vs. Capcom 3 however, I decided to check out X-23, Wolverine's female clone. I ended up reading her Innocence Lost origin story and enjoyed it. From there, I started reading various X-Men comics and it quickly exploded into my newest hobby. My other interests/hobbies include video games, movies, music, playing sports, my dogs and weird news.
View all posts by healed1337 →
This entry was posted in comic review, comics and tagged aphrodite ix, artifacts, artifacts of power, comic review, comics, cyber force, generation ix, Hephaestus IX, image comics, matt hawkins, post-apocalyptic, science fiction, science fiction comics, speros city, Stjepan Sejic, the darkness, top cow productions, witchblade. Bookmark the permalink.