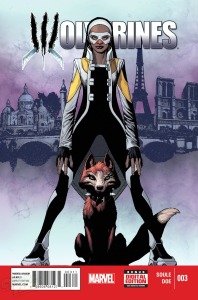 There’s no need to recap last week’s issue of Wolverines for this review. That’s because pretty much this entire issue focuses on introducing a new character, Fantomelle. Fantomelle is another experiment who escaped from the Weapon X Program; a thief with abilities similar to Fantomex but very different in both personality and that she has a telepathic connection with her fox.

Fantomelle seems like an interesting character so far, and it doesn’t hurt that her fox is just as loyal to her as a dog would be, just with more intelligent and insight. We first meet them when they’re trying to steal something from the Punisher. It’s not exactly the wisest thing in the world for a thief to do, but it’s a fun way to open the comic while playing around with the Punisher’s extreme nature. The rest of the issue introduces some of Fantomelle’s insecurities and desires, and then Siphon shows up to feed on her healing factor. The ending isn’t really a surprise if you’ve read Wolverines 1 and 2; X-23 shows up with a shotgun and blasts Siphon. X-23 hasn’t been seen using guns since X-Force volume 3, so that’s a welcome sight in its own right.

The art by Juan Doe is decent. It’s a darker, more stylized look than the first two issues, but this style can work for a series like Wolverines. The action flows well between panels. Syphon looks intimidating with his large body and bloodied sharp teeth. I only have two complaints about the art. One, there are maybe a few too many panels where characters show their teeth, which limits the variety of facial expressions. Two, X-23’s armour appears white instead of its yellow colour, and her highlights are completely missing. These are minor complaints, but they do hold the art back a bit.

With a series coming out weekly you need the occasional issue that takes a short break from the main story, and taking the time to introduce an interesting new character makes good use of that break. Charles Soule’s writing remains strong and I wouldn’t mind seeing more of this character. While this issue doesn’t feel completely necessary for the Wolverines series, it’s an enjoyable one that could be worth reading if the idea of Fantomelle compels you whether you plan on reading Wolverines in full or not. Considering the next issue takes place right after this one, it’s still worth picking up if you’re reading Wolverines anyway.

I am a relatively new comic book fan writing this blog for other new comic book fans and/or people who are interested in comics but don't know where to start. I've always been interested in writing, to the point where I have a college Creative Writing Certificate and I'm currently a year 2 Journalism student. I also have another blog where I mostly make fun of bad movies - www.healed1337.blogspot.com As for how I got into comics, I've always had a passing interest in superheroes: most notably Batman, Spider-man and the X-Men. Until February of 2011 (I think,) my only experience with any of these franchises came from the movies and video games. Shortly after I bought Marvel Vs. Capcom 3 however, I decided to check out X-23, Wolverine's female clone. I ended up reading her Innocence Lost origin story and enjoyed it. From there, I started reading various X-Men comics and it quickly exploded into my newest hobby. My other interests/hobbies include video games, movies, music, playing sports, my dogs and weird news.
View all posts by healed1337 →
This entry was posted in comic review, comics and tagged all new marvel now, charles soule, comics, death of wolverine, fantomelle, juan doe, marvel comics, siphon, the punisher, the weapon x program, weapon x, wolverine, wolverines, x-23. Bookmark the permalink.