Part of my reading goal for the year is to read at least one major comic story arc or comic run every month, whether I’m writing fiction that month or not, and then write a blog post about it. This month I actually did two; both Kelly Sue DeConnick’s first Captain Marvel volume and Avengers Academy in their entirety. Because everything that works about the first volume of Captain Marvel is still present here I’ll just say read it– it’s awesome, and it has more build-up toward the Enemy Within crossover than I remembered. Instead, let’s talk about Avengers Academy and what made this series special.

Because Avengers Academy started before I got into comics, I didn’t really know of its existence at first. Being an X-23 fan, I started reading Avengers Academy just before she joined the series (my first issue was AA 21). I later bought the trade paperbacks covering the first 21 issues (the Fear Itself tie-in paperback also has issue 14.1). Before this month, I’ve only read those issues once, whereas I’ve read every other issue at least twice. 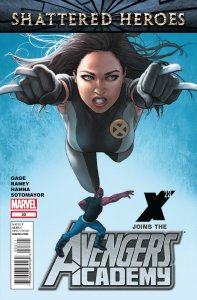 It’s unfortunate that most teenage-focused comics don’t sell all that well, because they’re often better written than the titles with all or mostly adult characters in the same franchise. Between House of M and Messiah Complex, the most consistently good X-Men book was New X-Men. I have yet to read Generation X beyond issue 2, but I’ve heard that Generation X started off as a very good series. And of course as part of Marvel’s Heroic Age, Avengers Academy was probably the best Avengers title around for its entire lifecycle from June, 2010, to November, 2012.

Written by Christos Gage, Avengers Academy starred 6 superpowered teenagers who were tortured at the hands of Norman Osborn during the Dark Reign period, along with Hank Pym, Tigra, Quicksilver and several alternating adult heroes as their mentors. The 6 teenagers were considered trouble students because of their experiences, and the original point of the Academy was to steer them toward being superheros rather than becoming villains. Despite that, the series carried an overall optimistic tone and remained fun through most of its run.

The six stars of the book are all great characters, with a variety of emotional issues, attitudes, abilities and downsides to their abilities. Reptil transforms into dinosaurs, and is probably the most heroic of the bunch and seems destined to become an Avenger one day. Veil can turn into various forms of gas, but her body is slowly losing cohesion and it will eventually kill her. Hazmat is nuclear powered but cannot turn her nuclear abilities off, which probably increases her anger problems. Mettle is similar to Colossus but he’s stuck in his metal form. Striker has electrical powers and is hilarious in that he’s more about the fame than he is about being a hero. Finesse has the same abilities as Taskmaster, but has always had trouble understanding and expressing emotion and morality.

(The Academy vs. Jeremy Brigs in the Final Exam arc)

The first six issues each delve into one of the main teenagers’ heads, introducing each of them organically. There’s plenty of drama even in the earlier issues, with tempers flailing, heated debates between the students and adults and a trip to the supervillain prison that demonstrates how at risk half of the students are. The only significant flaw is that there are way too many pop-culture references, sometimes even having two in the same sentence. The references are thankfully toned way down later on. The series also gets a little speech heavy at times, which is fine when you’re reading the issues one at a time but can slow down the overall pace when reading the series in bulk. That said, Christos Gage is pretty good at writing speeches so it’s not really a problem.

The weakest arc in the series is probably between the Fear Itself tie-ins and the Runaways guest appearance; the one involving the X-Men villain Hybrid. That’s not to say it isn’t good, but the time travel/mind swap plot is a little weird. It helps that in the same arc, Lightspeed, White Tiger and X-23 are added to the group and they’re all handled well. X-23’s first issue in particular contributes a lot toward Mettle’s own issues after the Fear Itself tie-ins (more on that soon) while in the same issue, Lightspeed helps Striker deal with his sexuality issues. There’s a lot of good character development in this arc, but the story suffers a bit when compared to the rest of the series. There’s not much to say about the Runaways arc without spoiling it, so let’s just say it’s short but sweet.

(Everything about the Fear itself arc works)

The event tie-ins are also worth mentioning. Fear Itself’s issues in particular are probably the best part of the entire series. When the entire world is thrown into chaos, the Academy kids are pretty much forced to act as heroes. Mettle accidentally kills a Nazi while he’s shooting at civilians, and it affects him emotionally for the rest of the series. Veil spends several minutes trying to rescue a little girl’s mother and succeeds, only for the mother to be gunned down. These are very brutal issues that not only focus on the civilians the event affects but it paves the way for further character development. The second Fear Itself arc is best left unspoiled, but it highlights how even if the kids are at risk, they all have a heroic side to them.

(An example of a more light-hearted moment)

The Avengers vs. X-Men tie-ins are also good, but the second arc maybe focuses a bit too much on X-23 and Juston (the kid with a sentinel) and barely has time to develop the core Academy kids. The first AVX arc on the other hand somehow brings character development for the Academy kids, the X-kids, Sebastian Shaw after his mind-wipe and still manages to tell a complete story. X-23 works as the central character for both arcs since she has ties to both groups and has trouble deciding which side she agrees with, yet the first arc includes every one of the Avengers Academy kids and gives them all development of their own. What’s funny about the arc is that most of the teenagers are acting wiser than the adults through the main event, and that goes for teenagers on both sides of the conflict. Also, Mettle surfing on land with Loa’s help is pure awesomeness.

The series ends with Final Exam, an arc that tests every one of the core Academy kids both physically and morally. After Alchemist depowers them and promises to do the same to every single superpowered being on Earth (hero or villain), Hazmat and Mettle have to decide whether they’re willing to sacrifice a normal life to defeat Alchemist. Reptil and White Tiger both must figure out what their magical abilities means to them. Without spoiling the ending, the conclusion seriously affects the friendship that grew between Finesse and X-23, which leads to an emotionally rough final issue for Finesse when she realizes her actions have pushed everyone away.

The second last issue (38) is a delightful football game between the Academy kids and Wolverine’s students. It somehow continues the Academy kids’ arcs while managing more character development for the X-kids than several arcs of Wolverine and the X-men. And at last, the series ends the same way it began, with Veil in a normal highschool, except it shows how even though she no longer has superpowers, the Academy helped boost her confidence and taught her how to defend herself. It really is the perfect bookend to the series.

I haven’t read Avengers Academy since it ended and by re-reading it, I’m reminded of how special it really is. The characters are great, the stories are fun and there’s a lot of emotional depth. Avengers Academy is a series that should be read by anyone who could see themselves enjoying a group of six troubled teenagers with superpowers. It’s not perfect but honestly, what series is? Oh, and the two-issue mini-arc of Amazing Spider-Man featuring the Academy kids is also good.

Avengers Academy should still be easy to find in paperback, plus the entire series is available on Marvel Unlimited.

I am a relatively new comic book fan writing this blog for other new comic book fans and/or people who are interested in comics but don't know where to start. I've always been interested in writing, to the point where I have a college Creative Writing Certificate and I'm currently a year 2 Journalism student. I also have another blog where I mostly make fun of bad movies - www.healed1337.blogspot.com As for how I got into comics, I've always had a passing interest in superheroes: most notably Batman, Spider-man and the X-Men. Until February of 2011 (I think,) my only experience with any of these franchises came from the movies and video games. Shortly after I bought Marvel Vs. Capcom 3 however, I decided to check out X-23, Wolverine's female clone. I ended up reading her Innocence Lost origin story and enjoyed it. From there, I started reading various X-Men comics and it quickly exploded into my newest hobby. My other interests/hobbies include video games, movies, music, playing sports, my dogs and weird news.
View all posts by healed1337 →
This entry was posted in comic review, comics and tagged amazing spider-man, avengers, avengers academy, avengers vs. x-men, avx, christos gage, comic review, comics, fear itself, finesse, hank pym, hawkeye, hazmat, iceman, lightspeed, marvel comics, marvel heroic age, mettle, new x-men, reptil, retrospective, spider-man, striker, the runaways, tigra, veil, wolverine, wolverine and the x-men, x-23. Bookmark the permalink.