Like I said in my Wolverines 4 review, I’ll only be reviewing this series by the month from now on, at least until there’s a notably good or bad issue. Because there are 4 issues to talk about, let’s try to keep this brief. The first month of Wolverines started a bit slow, with a very exposition heavy first issue that introduced the cast in a satisfying manner, but did little to kick off the plot. It probably would have worked better if they combined Logan Legacy 1 and 7 for the first issue and continued from there. It would have been a bit of a faster start, and then issue 2 could have focused more on the fight between the Wolverines and the Wrecking crew. That said, the first month showed potential and improved a bit with each issue.

Wolverines 5 and 6 are the best issues in the series so far, with a delightfully weird battle between the Wolverines, Mr. Sinister and an X-Men team led by Storm. It explored the moral differences between Shogun and Neuro. Neuro tries to betray the Wolverines while Shogun explains why that’s an incredibly bad idea. This leads to the revelation that Neuro may be very smart, but he’s unable to understand the chaos of such a large battle or realize that the Wolverines aren’t dumb. Sinister’s clones of different heroes make these two issues so much fun, whether it’s Shogun vs a Thor clone, Skel vs. Fing Fang Foom or the Wolverines fighting a whole group of Ben Reillys. It’s the best kind of insanity. 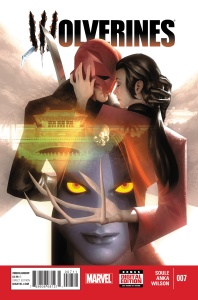 Issue 7 mostly focuses on Mystique and Shogun, with a bit of Lady Deathstrike. Here, Mystique fully announces to the rest of the team that she’s trying to control everyone. Even so, she manages to manipulate her way around Shogun while pretending to help him. This issue makes perfectly clear what Mystique’s endgame is, and in case you plan to read this but haven’t I won’t spoil what it is. This is Mystique at her best, playing everyone both openly and in secret.

Today’s issue is weird. Unlike issue 3, which tied into the main story by the end, this one takes a complete break from everything. Fang shows up to fight the team, accusing them of killing Wolverine while at the same time just looking for some fun. Apparently the two of them hang out once a year to fight in crazy situations and reminisce on old times. This is yet another retcon of Wolverine’s past, but compared to some this kind of works. After all, Wolverine did wear Fang’s costume for a time.

Each member of the team has at least one little moment. A brief exchange of lines shows that Shogun and Deathstrike are starting to fall for each other. Sabretooth shows that, even if he’s inverted, he still has a violent nature. Even after the loss of his arm, Daken hasn’t lost his courage or violent edge. Mystique is just herself. X-23 shows some real leadership and both co-ordinates the others and tries to play the peacekeeper, which works until … Mystique. The comic ends with a teaser for next issue’s focus on Daken.

If Wolverines 8 is any indication, the next few issues will take a break from the main story to focus on each of Wolverine’s legacy characters one at a time, with Sabretooth and then X-23 following Daken. It’s yet to be seen whether the main story continues through these issues or not.

Jonathan Marks’s art in issue 5 is a bit of an acquired taste. It’s often hard to see what’s going on when the colours blend together and the level of detail feels inconsistent at times, but it’s a dream-like appearance that sort-of matches the mood of invading such a weird location. I don’t like it, but some people might. Jason Master’s art in issue 6 is good. It’s a conventional style with a fair amount of detail, appropriate levels of gore and some great facial expressions in a couple close-ups. Kris Atka’s art in issue 7 is great. It’s a clean look with great backgrounds, interesting angles and fun interpretations of Mystique’s transformation abilities. Issue 8’s art by Juan Doe is again an acquired taste, but it’s never hard to figure out what’s going on and the blood splashes almost look real at times.

To sum up month 2, issues 5 and 6 are chaotic and a lot of fun; they are the best the series so far. Issue 7 has some great Mystique moments, which makes for a good comic. Issue 8 is weird but kind of fun. I wouldn’t call issue 8 good, but sometimes fun is all you need. Even though Wolverine is dead and this is a team book, this still feels like a Wolverine comic in a lot of ways. If you’re a fan of any of his legacy characters, this is at least worth checking out. Everyone feels in character so far, and there have been a lot of cameos from characters from around the Marvel Universe. Being a weekly series for $4 an issue can get expensive though, so some might want to wait for the trades.

I am a relatively new comic book fan writing this blog for other new comic book fans and/or people who are interested in comics but don't know where to start. I've always been interested in writing, to the point where I have a college Creative Writing Certificate and I'm currently a year 2 Journalism student. I also have another blog where I mostly make fun of bad movies - www.healed1337.blogspot.com As for how I got into comics, I've always had a passing interest in superheroes: most notably Batman, Spider-man and the X-Men. Until February of 2011 (I think,) my only experience with any of these franchises came from the movies and video games. Shortly after I bought Marvel Vs. Capcom 3 however, I decided to check out X-23, Wolverine's female clone. I ended up reading her Innocence Lost origin story and enjoyed it. From there, I started reading various X-Men comics and it quickly exploded into my newest hobby. My other interests/hobbies include video games, movies, music, playing sports, my dogs and weird news.
View all posts by healed1337 →
This entry was posted in comic review, comics and tagged ben reilly, charles soule, comic review, comics, daken, death of wolverine, fang, fing fang foom, jason masters, jonathan marks, juan doe, kris atka, lady deathstrike, laura kinney, marvel comics, mr. sinister, mystique, neuro, raven darkholme, ray fawkes, sabretooth, scarlet spider, shogun, skel, storm, the logan legacy, thor, victor creed, wolverine, wolverines, x-23, x-men. Bookmark the permalink.