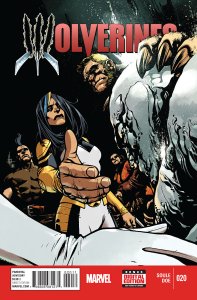 Well, that was disappointing.

Through much of this series, Wolverines has built up Mystique’s hopes to bring back Destiny, while creating and intensifying the rivalry she has with every other member of the Wolverines team. That’s a lot to conclude in one issue, but everything about Wolverines 20 feels rushed. Whether that’s trying to wrap up the story before Secret Wars or not I don’t know. From this point on, there will be spoilers because I can’t properly talk about this comic without them.

In the last issue, Mystique sent all of the surviving members of the team into a swamp with a starving Siphon, the monster who consumes healing factors. The resulting fight has X-23, Sabretooth and Lady Deathstrike all lose their healing abilities. First off, I was always under the impression that Deathstrike’s healing factor was cybernetic, so how exactly can that be absorbed? Second, X-23 slipped out of Siphon’s grip before by using her foot claws, so why didn’t she try that again? Third, the three of them, along with Daken and Shogun, should easily be able to defeat Siphon with a co-ordinated strike. But nope, we need all of them to lose their healing for plot purposes.

Mystique then redirects Siphon’s absorbed power, using a special artifact she gathered in issue 7, to open a portal to the nexus of realities. Of course after this, she sends Siphon back to the others to avoid having her own healing factor removed. The gang decided to track her down using Siphon. Then Deathstrike does the dumbest thing possible – she decapitates Siphon before he can absorb Mystique’s healing factor. Mystique then proceeds to walk right through all of them in an anti-climactic fight, ignoring all of the team’s intelligence that’s been shown earlier in the series. Somehow X-23 doesn’t recognize Mystique as Daken, even though she did earlier in the series and didn’t reveal how. Somehow Shogun’s situational awareness does nothing here.

This clearly isn’t the end of the story. The comic’s final pages tie into Secret Wars with the suggestion that this world needs a Wolverine. No, Destiny does not return. I feel let down here. This series has had its ups and downs, but for the most part it’s been kind of fun. Everything about this issue feels rushed just to make the ultimate cliffhanger ending. The fact that everyone on the team is in the Nexus of All Realities this could still lead in a number of directions, but we won’t know anything for sure until something is announced to come after Secret Wars.

Juan Doe handles the art, and his style isn’t necessarily bad, but it just feels wrong for a final issue. It’s a stylistic approach with exaggerated angles, simple colouring and mostly blank backgrounds. On most panels, characters either have their eyes closed or their eyes are pure white, and that’s distracting. One of Wolverines’ biggest problems is the inconsistent art styles between issues. For Marvel’s first weekly series, it would have been better to go with more conventional styles.

I wouldn’t go so far to say this comic is bad, but it’s a disappointment. Usually writer Charles Soule is much better than this. After all that time of the best written X-23 we’ve seen in years, she’s jobbed in the end. After all that build-up for bringing back Destiny, nothing comes of it. After all the hints that one of the team members would take on Wolverine’s mantle, we get a giant, unofficial “to be continued”. Unless you feel the need to finish this series, I wouldn’t recommend this issue.

I am a relatively new comic book fan writing this blog for other new comic book fans and/or people who are interested in comics but don't know where to start. I've always been interested in writing, to the point where I have a college Creative Writing Certificate and I'm currently a year 2 Journalism student. I also have another blog where I mostly make fun of bad movies - www.healed1337.blogspot.com As for how I got into comics, I've always had a passing interest in superheroes: most notably Batman, Spider-man and the X-Men. Until February of 2011 (I think,) my only experience with any of these franchises came from the movies and video games. Shortly after I bought Marvel Vs. Capcom 3 however, I decided to check out X-23, Wolverine's female clone. I ended up reading her Innocence Lost origin story and enjoyed it. From there, I started reading various X-Men comics and it quickly exploded into my newest hobby. My other interests/hobbies include video games, movies, music, playing sports, my dogs and weird news.
View all posts by healed1337 →
This entry was posted in comic review, comics and tagged charles soule, comic review, comics, daken, destiny, juan doe, lady deathstrike, laura kinney, marvel comics, marvel secret wars, mystique, nexus of all realities, sabretooth, secret wars, shogun, siphon, victor creed, wolverine, wolverines, x-23, x-men. Bookmark the permalink.