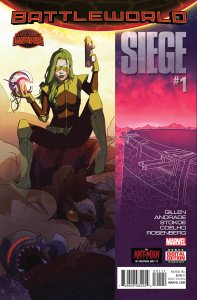 In Battleworld, there’s a wall called the SHIELD. This wall prevents the monsters of the deadlands (Marvel Zombies), Perfection (Ultron) and Annihilus’s bugs from entering the more civilized domains. Those who break the wrong rules are sentenced to the wall to fight these forces until they die. Most people try to avoid such a fate, but Abigail Brand embraces it.

Siege 1, written by Kieron Gillen, introduces the wall and most of its main characters. In addition to Brand, there’s Leonardo Da Vinci, a version of Kate Bishop, and Ms. America (sentenced to the all in A-Force 1). For the most part this issue focuses on these introductions, but not only are the introductions fun, but there’s still action.

The way Gillen weaves the wall’s history into conversations and exposition adds a lot of depth to the concept. Better yet, he throws in creative combinations of character’s powers, most notably when he joins Cyclops’s eyebeams with Da Vinci’s lenses for massive damage. Most importantly, this feels like an important tie-in that directly connects to the main Secret Wars event, especially when the ending promises that Thanos is coming. There aren’t any huge surprises in this comic, but it’s a very enjoyable read with creative uses of the Battleworld mythos.

The art is mostly by Filipe Andrade, but James Stokoe draws some of the two-page spreads. I’m not a fan of Andrade’s stylistic art, but it works. His two page spread of the wall shows how massive it is, and also adds a blimp and Knowhere into the background. All of the characters are recognizable and their outfits make it easier to guess which realm they came from. Stokoe’s spreads are more detailed and a bit cartoonish, but they also work. The first spread shows the scope of an attempted bug invasion, with Cyclop’s eyebeams tearing them apart. The bugs look creepy, with plenty of spikes and hairs on their bodies. His second spread portrays what happened when the wall last fell, with a montage of Ultrons tearing apart Battleworld. Again I’m not a fan of his art, but it works.

This is a great comic. Kieron Gillen’s writing is more than enough to carry this comic, and those who like the stylistic art will enjoy it more. Abigail is the perfect protagonist for this sort of series, being a brilliant and determined leader (if a bit harsh to her subjects) who never gives up in a fight. Anyone who’s reading Secret Wars should at least give this a chance. In addition to being both fun and intense, Siege might actually be the most important tie-in of them all.

I am a relatively new comic book fan writing this blog for other new comic book fans and/or people who are interested in comics but don't know where to start. I've always been interested in writing, to the point where I have a college Creative Writing Certificate and I'm currently a year 2 Journalism student. I also have another blog where I mostly make fun of bad movies - www.healed1337.blogspot.com As for how I got into comics, I've always had a passing interest in superheroes: most notably Batman, Spider-man and the X-Men. Until February of 2011 (I think,) my only experience with any of these franchises came from the movies and video games. Shortly after I bought Marvel Vs. Capcom 3 however, I decided to check out X-23, Wolverine's female clone. I ended up reading her Innocence Lost origin story and enjoyed it. From there, I started reading various X-Men comics and it quickly exploded into my newest hobby. My other interests/hobbies include video games, movies, music, playing sports, my dogs and weird news.
View all posts by healed1337 →
This entry was posted in comic review, comics and tagged abigail brand, annihilus, battleworld, comcis, comic review, cyclops, filipe andrade, james stokoe, jorge coelho, kate bishop, kieron gillen, leonardo da vinci, marvel zombies, ms. america, S.H.I.E.L.D, secret wars, siege, thanos, ultron. Bookmark the permalink.