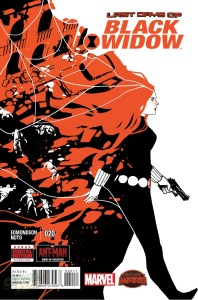 Last year, among a number of All-New Marvel Now titles, writer Nathan Edmondson and artist Phil Noto began their Black Widow espionage series. Most of the series told one, long tale of the former Soviet agent fighting a secret organization only known as Chaos. Even though the story lasted 18 issues, it didn’t feel too long for its own good. But for the last two issues, they touched on Black Widow’s past. Somehow it feels like the perfect way to end their run.

Black Widow 20 takes place in Cuba, during Natasha’s early days working for the Red Room. In the last issue, she worked with a friend to convince a couple to side with the Russians, instead of defecting to the United States. Of course at the end of the issue, she learns that her friend has “gone too deep” and “must be eliminated”. Knowing that, every interaction they share in this issue feels all the more tense, when otherwise they’d seem like normal conversations. The story is fun, while also exploring how dark black ops can be. The twists in this issue lead to an even darker comic than you’d expect from last issue’s end. To help ease the tension, the comic both starts and ends with Black Widow helping evacuate citizens during the final incursion, trying to make up for her past sins until the very end.

The art is great as usual. Noto’s knack for visual storytelling is on full display. One of Natasha’s informants dips a page of information in coffee to destroy the note in the middle of their conversation. There’s a montage where Natasha readies for her mission, complete with a hidden gun compartment in her luggage. She’s is obviously conflicted over killing her friend, made clear by her distant expressions during their last conversation and her show of hesitance while enacting the deed. But what’s really amazing about Noto’s art is that he drew all 20 issues consistently well, and the series was never delayed. He deserves special props for that.

I’ll miss Black Widow, and I hope that she’ll return in some way after Secret Wars ends. It’s been a great espionage series that balances itself well with action, plot twists, glimpses into Natasha’s past and guest stars from all over the Marvel Universe. I would recommend this to anyone interested in an espionage comic, especially those who read Marvel. Black Widow 20 gives us a satisfying conclusion.

I am a relatively new comic book fan writing this blog for other new comic book fans and/or people who are interested in comics but don't know where to start. I've always been interested in writing, to the point where I have a college Creative Writing Certificate and I'm currently a year 2 Journalism student. I also have another blog where I mostly make fun of bad movies - www.healed1337.blogspot.com As for how I got into comics, I've always had a passing interest in superheroes: most notably Batman, Spider-man and the X-Men. Until February of 2011 (I think,) my only experience with any of these franchises came from the movies and video games. Shortly after I bought Marvel Vs. Capcom 3 however, I decided to check out X-23, Wolverine's female clone. I ended up reading her Innocence Lost origin story and enjoyed it. From there, I started reading various X-Men comics and it quickly exploded into my newest hobby. My other interests/hobbies include video games, movies, music, playing sports, my dogs and weird news.
View all posts by healed1337 →
This entry was posted in comic review, comics and tagged all new marvel now, black widow, comic review, comics, espionage, espionage comics, marvel comics, natasha romanova, nathan edmondson, phil noto, secret wars. Bookmark the permalink.