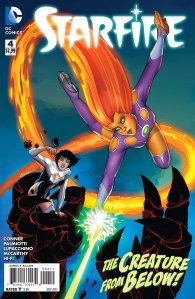 The last issue of Starfire saw the arrival of a rock monster in Key West, and the reveal that a local waitress happened to be the geokinesis superhero Atlee. That’s where this issue begins.

The opening fight scene is fun, and shows some great teamwork between Starfire and Atlee. They use their brains to defeat the monster, and in doing so, they form a bond that will hopefully continue with this series. The fight takes up about half of the issue and it’s probably the better half. After the fight there are plenty of amusing moments, whether it’s Starfire mistaking phrases for their literal meaning, her not understanding human sexual boundaries and of course the sheriff freaking out after all sorts of strange events in the last 4 days. There’s a lot to like about this comic, making for an overall delightful experience.

That said, the second half is made up of a whole bunch of short scenes, touching on almost every minor character who’s appeared so far and introducing a potential future conflict. It almost feels unfocused, and most of these scenes could have benefitted from a bit more time. The writing by Amanda Conner and Jimmy Palmiotti is consistently fun but slowing the pace a bit would have made this issue better.

The art by Emanuela Lupacchino is very good for the most part. Everything has a smooth appearance to it, yet there’s plenty of detail in the backgrounds. The debris in the opening fight is impressive, with broken up roads, rolled over cars and motion blurs. The little image thought bubbles showing Starfire misunderstanding phrases are great, like the “shower head” and a donkey in a clown outfit. That said, even after their submerged in water, nobody looks like they’re actually wet. Their hair doesn’t change colour, and it stays curly like a shampoo commercial. Also there are times when, despite their different skin colours, Starfire, Atlee and the sheriff look almost identical, and it’s especially noticeable when they’re sitting at a pool together. The colouring by Hi-Fi is fantastic and the entire comic is bright and colourful.

Starfire is such a fun series so far. While I have a few complaints, this is still a contender for my favourite comic of the week, along with Ms. Marvel 18, Siege 3 and Giant-Size Little Marvel AVX 4. As a newcomer I’m not sure how this lines up with other portrayals of the character. For those looking for a fun female character who’s getting used to Earth customs while doing some superheroing every now and then, you should give this a chance.

I am a relatively new comic book fan writing this blog for other new comic book fans and/or people who are interested in comics but don't know where to start. I've always been interested in writing, to the point where I have a college Creative Writing Certificate and I'm currently a year 2 Journalism student. I also have another blog where I mostly make fun of bad movies - www.healed1337.blogspot.com As for how I got into comics, I've always had a passing interest in superheroes: most notably Batman, Spider-man and the X-Men. Until February of 2011 (I think,) my only experience with any of these franchises came from the movies and video games. Shortly after I bought Marvel Vs. Capcom 3 however, I decided to check out X-23, Wolverine's female clone. I ended up reading her Innocence Lost origin story and enjoyed it. From there, I started reading various X-Men comics and it quickly exploded into my newest hobby. My other interests/hobbies include video games, movies, music, playing sports, my dogs and weird news.
View all posts by healed1337 →
This entry was posted in comic review, comics and tagged amanda conner, atlee, comic review, comics, dc comcis, emanuela lupacchino, florida keys, hi-fi, jimmy palmiotti, koriand'r, starfire. Bookmark the permalink.