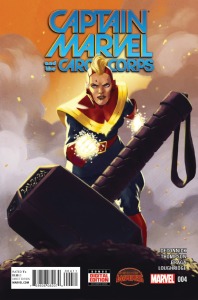 This isn’t just the conclusion to Captain Marvel’s tie-in to Secret Wars. This isn’t just a conclusion to Kelly Sue Deconnick’s Captain Marvel run that began in 2012. This concludes the run that gave birth to the Carol Corps fan movement, which is quite possibly the most prominent and inspiring fandom in the comic industry right now. Also for the foreseeable future, this ends DeConnick’s work for Marvel as she moves more into creator-owned comics. Even though a part of me would rather review Years of Future Past 5, I couldn’t possibly let this issue release without this post. Let’s review Captain Marvel and the Carol Corps 4.

Co-written by Kelly Thompson, this issue starts off where the last left off. Captain Marvel and her Banshee Squad have left their domain in Battleworld, and by now we know that’s a big no no. A team of Thors is on the way to take care of them. Most of this issue is dedicated to this fight scene and its build-up. There’s a little nod to the brief romance between Carol and War Machine, which we unfortunately didn’t see much of, but it’s a nice touch.

The main fight scene itself is fun, with Carol using her maneuvering skills to keep ahead of the Thors while Banshee squad prepares to open fire. The dialogue here is some of Kelly Sue DeConnick’s best yet. The way the squad throws Asgardian speak (badly) into their chatter is hilarious, but the best line might be the Asgardian way of saying “thank you captain obvious.” And of course Carol faces off with Kit Thor 1-on-1 while arguing about whose side they’re really on. After Kit learns the Banshee squad only wants to fly beyond the atmosphere though, she sides with Carol and takes down the other Thors. It’s a nice way to touch on their friendship that started with DeConnick’s first Captain Marvel volume. The comic’s ending manages to toss in the “higher, further, faster, more” line in a way that feels perfectly in place with this issue; the perfect send-off.

The art by Laura Braga and Paolo Pantalena is good. The action flows well, displaying speed and maneuvering in the air with motion blurs. There’s a good variety of looks in the Thor Corps. I’m guessing one is Tony Stark Thor, and I’m pretty sure there’s Domino Thor in there, which is awesome. Facial expressions capture Carol’s determination perfectly, and there’s a wide variety of emotions on display during her fight with Kit. The colouring by Lee Loughridge is also good. Sometimes the comic appears a bit yellow, but when it takes place on a beach at day, with Carol’s powers and fighter jets firing missiles, that’s fine.

After the comic ends, there’s a touching note by Kelly Sue DeConnick, thanking everyone for her time on the title. It shares how much Captain Marvel meant to her, and it must be read if you pick this up. This comic in general feels like a love letter to the Carol Corps, yet it still tells a good story with fun action and great dialogue. For that, this is an easy recommendation for Captain Marvel fans, or anyone curious to check this character out.

I am a relatively new comic book fan writing this blog for other new comic book fans and/or people who are interested in comics but don't know where to start. I've always been interested in writing, to the point where I have a college Creative Writing Certificate and I'm currently a year 2 Journalism student. I also have another blog where I mostly make fun of bad movies - www.healed1337.blogspot.com As for how I got into comics, I've always had a passing interest in superheroes: most notably Batman, Spider-man and the X-Men. Until February of 2011 (I think,) my only experience with any of these franchises came from the movies and video games. Shortly after I bought Marvel Vs. Capcom 3 however, I decided to check out X-23, Wolverine's female clone. I ended up reading her Innocence Lost origin story and enjoyed it. From there, I started reading various X-Men comics and it quickly exploded into my newest hobby. My other interests/hobbies include video games, movies, music, playing sports, my dogs and weird news.
View all posts by healed1337 →
This entry was posted in comic review, comics and tagged battleworld, captain marvel, captain marvel and the carol corps, carol corps, carol danvers, comic review, comics, domino, kelly sue deconnick, kelly thompson, kit, laura braga, lee loughridge, marvel comics, secret wars, thor, thors, tony stark. Bookmark the permalink.

2 Responses to Captain Marvel and the Carol Corps 4 review