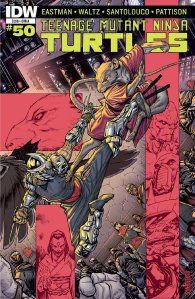 Growing up, I enjoyed the Ninja Turtles NES games. I enjoyed playing co-op while beating up foot ninjas in the streets, but that was the extent of my Ninja Turtles experience. I never really became a fan, and over time I forgot about them. I enjoyed the first live action movie of course, and although it was weird, I enjoyed the CGI movie from 2007 when I watched it with a bigger TMNT fan than I. I heard a lot of good things about this new comic series that began not long after I first got into comics, but didn’t buy any of them until just before I went on vacation (and I read 1-10 during the car ride).

The series was good, but while I stuck with it, I still wasn’t quite a fan. Then the City Fall story arc released, and everything about it was brilliant. That’s the point where I finally became a Ninja Turtles fan, and I’ve eagerly awaited each new comic ever since. Today, Teenage Mutant Ninja Turtles 50 released, and with it, the final confrontation between the Turtles and Shredder’s Foot Clan. This double-sized issue is epic in more ways than one.

The issue starts off by continuing the 4-on-4 fight between the turtles and Shredder’s best fighters. Bebop and Rocksteady alone could defeat the team, and they’re joined by Bludgeon and Koya (a mutant shark and a mutant hawk). The opening fight is intense and fun. After they took a beating in the last issue, they re-strategize and figure out a way to beat the four using wits over brawn. Considering a building falling on top of Bebop and Rocksteady didn’t seem to hurt them a while back, brawn wasn’t going to work anyway.

The Turtles then fight Shredder himself in a fight that highlights how tough and skilled he really is, but it still manages to give Donatello and Michelangelo decent feats of their own. Then there’s the climactic duel between Shredder and Splinter on a rooftop, just like the 1990 movie. Unlike the movie however, the fight actually lasts.

As awesome as the action is though, the real highlight is the drama going on behind it. The fight is intercut with flashbacks into Splinter and Shredder’s past, when they studied as ninjas in Japan as brothers. It highlights how they used to love each other and have more similarities than one would think when they see a man in a metal suit fighting a sword-wielding rat. Even during the fight they talk as equals, reminiscing on the past. It’s what makes this issue work so well.

The conclusion is a very satisfying end to the last 50 issues, while teasing several directions that TMNT could go from here. This isn’t the end of the Ninja Turtles series by IDW by any means; it’s just the end of a chapter. Tom Waltz’s writing is almost perfect in this issue, with story credits also going to Kevin Eastman and Bobby Curnow.

The art in this issue is also great. The main fight is handled by Mateus Santolouco. The fighting is smooth and easy to follow, and everything is well detailed. The circular arena for the first part of the ritualistic fight is complete with cage doors and an audience full of ninjas in their black outfits. The outdoor setting for the second half is complete with varied buildings in the backgrounds and a night sky complete with stars in a brilliant 2-page spread to open it up. Meanwhile, Cory Smith handles the flashbacks in a look that’s similar yet different, taking on a slightly more realistic approach. We also see nice forest backgrounds and a good look at Splinter and Shredder at different points in their life. Ronda Pattinson handles colouring for both, and it’s great throughout. The fight scene is bright and colourful, while the flashbacks are shaded a bit grey to add to the effect.

This is my favourite comic of the week, and any Ninja Turtles fans who haven’t give this series a chance should do so. That’s whether you usually read comics or not. The series as a whole strikes a good balance between dramatic storytelling and fun. It’s too early to tell whether I prefer this issue or City Fall, but they’re both works of genius. Sure it’s double priced, but with nicer paper and 48 pages of story uninterrupted by ads, it’s well worth it.

I am a relatively new comic book fan writing this blog for other new comic book fans and/or people who are interested in comics but don't know where to start. I've always been interested in writing, to the point where I have a college Creative Writing Certificate and I'm currently a year 2 Journalism student. I also have another blog where I mostly make fun of bad movies - www.healed1337.blogspot.com As for how I got into comics, I've always had a passing interest in superheroes: most notably Batman, Spider-man and the X-Men. Until February of 2011 (I think,) my only experience with any of these franchises came from the movies and video games. Shortly after I bought Marvel Vs. Capcom 3 however, I decided to check out X-23, Wolverine's female clone. I ended up reading her Innocence Lost origin story and enjoyed it. From there, I started reading various X-Men comics and it quickly exploded into my newest hobby. My other interests/hobbies include video games, movies, music, playing sports, my dogs and weird news.
View all posts by healed1337 →
This entry was posted in comic review, comics and tagged bebop and rocksteady, bobby curnow, city fall, comic review, comics, cory smith, donatello, foot clan, idw comics, kevin eastman, mateus santolouco, michelangelo, raphael, ronda pattison, shredder, splinter, teenage mutant ninja turtles, tmnt, tom waltz. Bookmark the permalink.