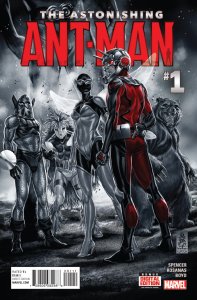 Yet another week of a small pull list – I only picked up 3. This is partly because of the excessive delays going on – Extraordinary X-Men should have been releasing this month. And apparently there are more delays coming for team books, both X-Men and other. Seriously Marvel, this is getting ridiculous. Also my local shop still hasn’t received the part of last week’s order that never showed up, so I still don’t have either A-Force 5 or Civil War 5. I’ll give it another week, and then I’ll have to order them online. Anyway, let’s talk about Astonishing Ant-Man 1.

I enjoyed Nick Spencer’s previous volume of Ant-Man. The first issue read as a great character study one-shot, while also giving us a fun little adventure. The rest of the 5-issue series told a good story that brought back a major Scott Lang villain while also exploring the relationship between Scott and his daughter, Cassie. While I enjoyed the series, I wasn’t sure whether I wanted to pick this up or not. Seeing how I only had 2 other comics to pick up this week, why not?

For the most part I’m glad I picked this up. Continuing 8 months after Ant Man 5, this comic is fun the same way that the previous volume is. It’s a somewhat comedic issue, highlighting Scott’s murky past and current struggles in amusing ways while also giving us a fun supervillain fight. While the comic is fun, there’s a lot of drama hiding beneath the jokes. Scott’s security business is doing alright, but he’s struggling to pay off his loan. His relationship with Cassie is strained. I’m still not sure how I feel about that last point. But most importantly, the cliffhanger ending suggests that things are about to get worse. It’s this balance that makes this comic feel stronger when you actually think about it afterward, rather than just reading through it.

Ranon Rosana’s art is good. It’s a deceptively simple look, with a bit of a classic feel. The backgrounds are often more detailed than the characters themselves, whether it’s the brick walls of Ant-Man Security Solutions, an assassin’s tornado powers or the debris on the ground after the fight scene. Jordan Boyd’s colouring is also good – it’s bright on normal pages, and faded whenever it’s a flashback or you’re looking through a window.

I’m not yet sure if I’ll stick with this series, but I’m glad to have picked up the first issue. If you enjoyed the previous volume, you should also pick this up. Those who want to check Scott Lang in the comics out will probably enjoy this, but I’d recommend picking up Nick Spencer’s first volume in trade first.

I am a relatively new comic book fan writing this blog for other new comic book fans and/or people who are interested in comics but don't know where to start. I've always been interested in writing, to the point where I have a college Creative Writing Certificate and I'm currently a year 2 Journalism student. I also have another blog where I mostly make fun of bad movies - www.healed1337.blogspot.com As for how I got into comics, I've always had a passing interest in superheroes: most notably Batman, Spider-man and the X-Men. Until February of 2011 (I think,) my only experience with any of these franchises came from the movies and video games. Shortly after I bought Marvel Vs. Capcom 3 however, I decided to check out X-23, Wolverine's female clone. I ended up reading her Innocence Lost origin story and enjoyed it. From there, I started reading various X-Men comics and it quickly exploded into my newest hobby. My other interests/hobbies include video games, movies, music, playing sports, my dogs and weird news.
View all posts by healed1337 →
This entry was posted in comic, comic review and tagged all-new all different marvel, ant man, ant man security solutions, astonishing ant man, cassie lang, Jordan Boyd, marvel comics, nick spencer, Ranon Rosana, scott lang. Bookmark the permalink.