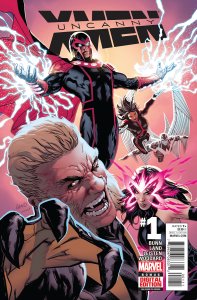 When Marvel first announced Cullen Bunn’s Uncanny X-Men, I had mixed feelings. On the one hand, Magneto leading a team of X-Men, each with a history of violence and some of them former villains, I was immediately intrigued. On the other hand, there’s Greg Land’s involvement. I don’t hate Land’s art as much as some, but I’m definitely not a fan and the more I look at it, the more his faults are apparent even if I’m not looking for them. Can Bunn’s writing make up for Land’s faults?

Uncanny X-Men 1 is a very straight forward issue. Most of this comic is a single fight scene as Magneto and his team attack a truck that’s carrying a group of mutants in stasis. The story is fitting for his character and at least some of his followers, and for the most part the team’s interactions are fun. That said, this entire issue feels like an extended introduction. The team’s long-term goals aren’t explored all that much, and the reasons they’re working together aren’t even touched on, save for Psylocke’s reason for sticking around. I get that first issues are best left with some unanswered questions but this issue takes that too far.

There’s nothing all that special about this issue. Unlike Extraordinary X-Men, the entire team is already together, but like Extraordinary, it’s taking its sweet time to explain what’s going on. From a storytelling aspect Bunn’s Uncanny X-Men has a lot of potential, but it’s not there yet. Personally I’d recommend waiting and seeing where this series goes from here, and if you don’t like Land’s art, this issue certainly won’t change your opinion. I’m not sure whether I’ll pick up issue 2 or not.

I am a relatively new comic book fan writing this blog for other new comic book fans and/or people who are interested in comics but don't know where to start. I've always been interested in writing, to the point where I have a college Creative Writing Certificate and I'm currently a year 2 Journalism student. I also have another blog where I mostly make fun of bad movies - www.healed1337.blogspot.com As for how I got into comics, I've always had a passing interest in superheroes: most notably Batman, Spider-man and the X-Men. Until February of 2011 (I think,) my only experience with any of these franchises came from the movies and video games. Shortly after I bought Marvel Vs. Capcom 3 however, I decided to check out X-23, Wolverine's female clone. I ended up reading her Innocence Lost origin story and enjoyed it. From there, I started reading various X-Men comics and it quickly exploded into my newest hobby. My other interests/hobbies include video games, movies, music, playing sports, my dogs and weird news.
View all posts by healed1337 →
This entry was posted in comic, comic review and tagged all new marvel, comic review, comics, cullen bunn, greg land, magneto, marvel comics, monet st. croix, nolan woodard, psylocke, sabretooth, uncanny x-men, victor creed, x-men. Bookmark the permalink.