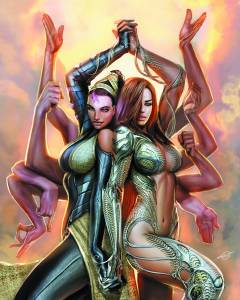 As far as I can tell, this is a re-release of a comic that first came out almost 10 years ago. Even then, I’m happy to talk about a Witchblade comic again since the main series ended last year, and Switch 3 is delayed until next month. So without further to do, let’s talk about the Devi Witchblade crossover.

In a lot of ways, this is a fairly straight forward crossover that takes place during Ron Marz’s first Witchblade run, co-written by him and Samit Basu. Sara Pezzini is sent to India to help solve a strange murder, which leads her to a bunch of zombies, an ancient Indian demon and Devi. While the two heroes fight like in many crossovers, this time it makes sense since Devi remembers fighting a previous wielder of the Witchblade artifact from centuries past. I wouldn’t say there’s anything special about this crossover, but it’s a lot of fun and sometimes it’s quite amusing. This story also fits the Witchblade mythology quite well. When you crossover one company’s character with another, fun is all you need it to be. It’s odd that the NYPD would send Sara to India to help solve a murder, but I’ve heard of much worse excuses for a crossover.

There’s a full team behind the art so I won’t even try to figure out who does each page. The main art is by Eric Basaldua, Rick Basaldua and Mukesh Singh, and the colouring is handled by Rob Schwager, Mukesh Singh, Parasuraman a. and Virgin Studios. All of the art is very good. There’s a lot of detail everywhere you look, the demon’s appearance is intimidating, facial expressions do a great job at conveying emotions and the action feels big. I’m actually split between this comic and Star Wars 15 for the best art of the week, but it’s between these two.

Devi/Witchblade 1 is just fun, and from what I can tell, there is a second part of this crossover that will hopefully be re-released as well. I can’t comment on the Devi fanbase since I never heard of her before I found out about this crossover, but this issue makes her mythology very interesting. As for Witchblade fans, if you haven’t read this before, this is definitely worth picking up.

I am a relatively new comic book fan writing this blog for other new comic book fans and/or people who are interested in comics but don't know where to start. I've always been interested in writing, to the point where I have a college Creative Writing Certificate and I'm currently a year 2 Journalism student. I also have another blog where I mostly make fun of bad movies - www.healed1337.blogspot.com As for how I got into comics, I've always had a passing interest in superheroes: most notably Batman, Spider-man and the X-Men. Until February of 2011 (I think,) my only experience with any of these franchises came from the movies and video games. Shortly after I bought Marvel Vs. Capcom 3 however, I decided to check out X-23, Wolverine's female clone. I ended up reading her Innocence Lost origin story and enjoyed it. From there, I started reading various X-Men comics and it quickly exploded into my newest hobby. My other interests/hobbies include video games, movies, music, playing sports, my dogs and weird news.
View all posts by healed1337 →
This entry was posted in comic, comic review and tagged delightfully weird, devi, eric basaldua, fantasy, graphic india, image comics, mukesh singh, mythology, parasuraman a., rick basaloua, rob schwager, ron marz, samit basu, sara pezzini, top cow productions, virgin studios, witchblade. Bookmark the permalink.