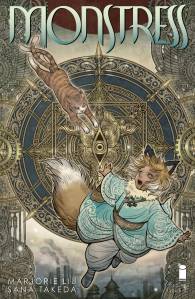 Monstress 3 picks up exactly where Monstress 2 left us, with Maika and the fox-like Kippa are being threatened by Inquisitrixes in the countryside. Things looked hopeless until the monster inside Maika emerged to tear apart her attacker. If that confuses you, I’ll try to explain in the next paragraph, but there’s a lot of mystery in this comic that has yet to be solved. Either way, it’s a very imaginative fantasy series written by Marjorie Liu.

Maika is a one-armed girl with a monster living inside her, and when the monster unleashes itself in the opening pages, it’s kind of terrifying. Maika herself is scared by the thing and is on a quest to figure out what’s going on. The world itself is split into two factions, with The Federation of Man on one side and the Arcanic hybrids on the other. Maika is being chased by the Federation’s Inquisitrixes after she killed one of their leaders in Monstress 1. This issue is mostly the confrontation with the Inquisitrixes, but there are a lot of hints about the monster dropped into the narrative, both through the action and in a dramatic vision Maika experiences.

With a triple-sized first issue that helped set everything up, it’s already kind of hard to talk about this series without explaining things, but the recap page helps a lot with that. Monstress is a very rich world with some fascinating Asian mythology and good characters. It’s a blend of this mythology and horror, plus the fact that it stars a crippled girl makes it unique in the world of comics. Liu’s writing can be a bit of an acquired taste in some ways, but she’s great at developing characters and she really feels at home with this kind of fantasy setting. The main story doesn’t move forward much in this issue, but the conflicts and answers we get make up for that.

The art and colouring by Sana Takeda is fantastic. There’s a lot of detail in everything, from the monster’s black tentacles to the swords with fancy designs in the hilts. The backgrounds are rich with long grass that’s clearly trampled on, trees that darken the nearby forests and the building complete with hieroglyphics on the walls in Maika’s vision scene. Sometimes in the water you can even see hints at the ground below the water. The action also flows well, and it’s brilliantly bloody.

Although this fantasy series won’t be for everyone, it’s a good series so far with a lot of imagination behind the story. The ongoing mystery behind the monster is intriguing. If you like Marjorie Liu’s writing, Sana Takeda’s art or are interested in an Asian Fantasy series, this is at least worth a read. Just know that it’s a dark and brutal comic that’s not for the squeamish.

I am a relatively new comic book fan writing this blog for other new comic book fans and/or people who are interested in comics but don't know where to start. I've always been interested in writing, to the point where I have a college Creative Writing Certificate and I'm currently a year 2 Journalism student. I also have another blog where I mostly make fun of bad movies - www.healed1337.blogspot.com As for how I got into comics, I've always had a passing interest in superheroes: most notably Batman, Spider-man and the X-Men. Until February of 2011 (I think,) my only experience with any of these franchises came from the movies and video games. Shortly after I bought Marvel Vs. Capcom 3 however, I decided to check out X-23, Wolverine's female clone. I ended up reading her Innocence Lost origin story and enjoyed it. From there, I started reading various X-Men comics and it quickly exploded into my newest hobby. My other interests/hobbies include video games, movies, music, playing sports, my dogs and weird news.
View all posts by healed1337 →
This entry was posted in comic, comic review and tagged asian fantasy, comics comic review, creator owned comics, dark fantasy, fantasy, image comics, maika, monsters, mythology, sana takeda. Bookmark the permalink.