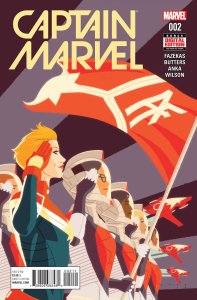 In the previous issue of Captain Marvel, a mysterious ship attacked the Alpha Flight station, which is Earth’s new main defense against Extra-terrestrial threats. After they defeat the ship, Captain Marvel leads Alpha Flight inside to figure out what’s going on, and that’s where this issue begins.

Captain Marvel 2, written by Michele Fazekas and Tara Butters, feels kind of like a sci-fi horror movies, just without the intentional scares. There’s a creepy yet fun vibe to the whole story as they slowly learn what’s going on with this old and seemingly empty vessel. It’s best left unspoiled what happens since discovering the ship is what makes this issue fun. The dialogue is consistently good, like Puck’s lines about whether people should vomit or not. The scientist, Wendy, is always entertaining with her boundless enthusiasm, which makes her kind of adorable. Of course this kind of issue wouldn’t work without some sort of fight scene, and the fight itself is both fun and leads to a pretty intense cliffhanger.

The art by Kris Anka is great. The ship is dark and creepy looking, with the light reflecting off the walls and [censored for spoilers] in a realistic fashion. Facial expressions do a great job at conveying emotions, whether it’s Wendy’s excitement, Carol’s growing nervousness or Puck’s disgust after he’s slimed at one point. And of course when the action begins, it’s well detailed with laser blasts, the scratches Carol suffers and the various energy powers being used. The colouring by Matthew Wilson is also great. Even in the dark environment, everything is colourful and easy to tell apart.

I am a relatively new comic book fan writing this blog for other new comic book fans and/or people who are interested in comics but don't know where to start. I've always been interested in writing, to the point where I have a college Creative Writing Certificate and I'm currently a year 2 Journalism student. I also have another blog where I mostly make fun of bad movies - www.healed1337.blogspot.com As for how I got into comics, I've always had a passing interest in superheroes: most notably Batman, Spider-man and the X-Men. Until February of 2011 (I think,) my only experience with any of these franchises came from the movies and video games. Shortly after I bought Marvel Vs. Capcom 3 however, I decided to check out X-23, Wolverine's female clone. I ended up reading her Innocence Lost origin story and enjoyed it. From there, I started reading various X-Men comics and it quickly exploded into my newest hobby. My other interests/hobbies include video games, movies, music, playing sports, my dogs and weird news.
View all posts by healed1337 →
This entry was posted in comic, comic review and tagged all new marvel, alpha flight, captain marvel, carol danvers, comic review, comics, kris anka, marvel comics, matthew wilson, michele fazekas, puck, sci-fi, science fiction, tara butters. Bookmark the permalink.